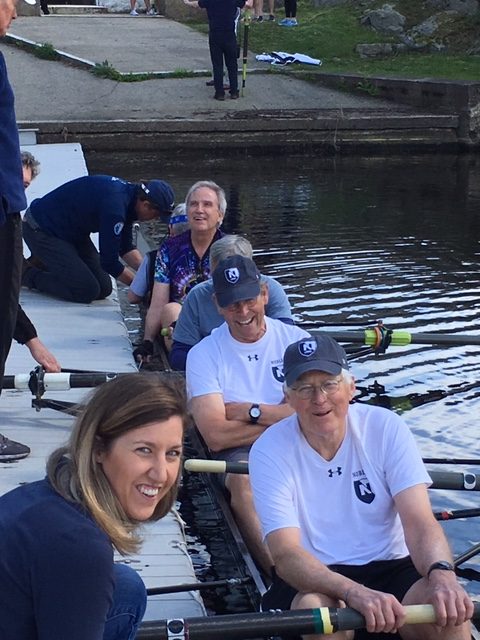 The weather could not have been better for the first open rowing hours during Reunion Weekend. The Nobles crew coaches, led by Blair Crawford, were on hand to help graduates take out shells before heading off to their races in the afternoon. We hope that this becomes an annual tradition for our graduate rowers.

Three boats entered the water from the Lincoln Boathouse and went out onto Motley’s Pond and down the Charles, passing the playing fields where the graduate womens soccer and graduate mens lacrosse games were taking place. The Lincoln Boathouse, which is currently used only for middle school crew, is a nostalgic place, hosting our rowing teams for many decades. It is full of memories for the many graduates who rowed there, and one of the most picturesque locations on campus.

Graduates from the class of 1964, celebrating their 55th Reunion, enjoyed a special experience summed up by Ned Lawson ‘64: “In an effort to renew the spirit of their undergraduate years, five members of the class of ’64 ventured out on the Charles. Celebrating their 55th reunion and now in their mid-70’s, they did not row long or hard and relatively few strokes felt like the real thing. On their return to Motley’s Pond they passed a shell rowed by female graduates headed downstream. After a brief discussion, the ’64’ers decided that discretion is the better part of valor, and no challenge to a race was forthcoming. The fact that they returned to the boathouse without capsizing or even catching a crab was victory enough. Thanks to the Nobles coaches for their time and patience in making the reunion row so successful.”

We hope to see folks from ‘64 and many other classes back on the river again next year! 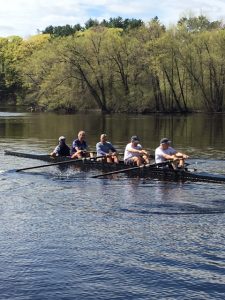