by Noble and Greenough School
Student Life May 24, 2012 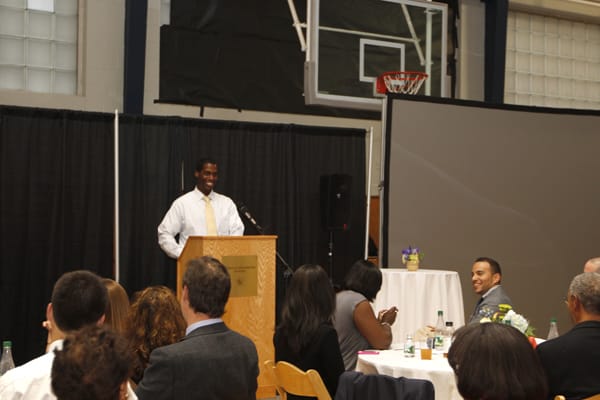 On Tuesday, May 22, students, family, friends and faculty gathered for the 15th annual Freeman Legacy Dinner to celebrate the experiences and accomplishments of 34 graduating students of color at Nobles.

Dean of Diversity Initiatives Steven Tejada catalogued the ways in which the students present have contributed to the community: leadership in the Multicultural Student Association, Student Life Council, and affinity groups as well as in athletics, visual and performing arts and community service. “You continue to expand the concept of what it means to be a student of color. In doing so, you have set a fine example for the juniors,” he said.

Head of School Bob Henderson spoke about the history of diversity at the school and the importance of Nobles’ iconic building, the Castle. Because of construction, the dinner could not be held at the Castle this year. Henderson noted the Castle’s relevance, however, when he said, “The building was built for a plutocrat during a period of American history that was distinguished by its non-inclusive nature. It's important to host this dinner in the Castle because the space now serves as a metaphor for an inclusive community for our school.”

The Legacy Dinner is named after former artist-in-residence Bob Freeman for his dedication to diversity work during 25 years at Nobles.

Guest speaker Marzuq Muhammad ’01 reminisced about his days as a student. Arriving in ninth grade with his twin brother from Boston Public Schools, he said that he experienced culture shock at Nobles. “Not only did I not look like most of the kids in my class, which was a new experience for me, but I also didn’t feel like I had the same interest outside of school,” he said. “In many ways I felt like an outsider dropped into someone else’s world.”

It didn’t take Muhammad long to realize that he had a strong support system at Nobles. He asserts that what makes Nobles unique is the supportive culture of the faculty and the student-teacher relationship, which helped him develop confidence to speak with adults. “Nobles even compelled me to explore my own culture,” he said. Muhammad took an African American literature class and expressed that he learned a lot from his mostly white classmates. In his senior year, Muhammad spoke in Assembly about what it means to be Muslim at Nobles.

He was awarded the Nobles Young Graduate award this year given to a graduate who pursues the school’s mission in life after graduation and inspires leadership for the public good. He will also serve on the Nobles Board of Trustees next year.

Muhammad left the soon-to-be graduates with these words: “We change the world by simply changing ourselves, particularly by altering our thinking to believe in ourselves and in our ability to do just this. I can promise you that in practicing this we will each create a ripple that generates the waves of influence that move others into action. And in doing this we all will be the leaders that serve the public good.”

Following the speech, seniors traveled down memory lane with a video that ended with Class I students offering some words of wisdom to Class II students.