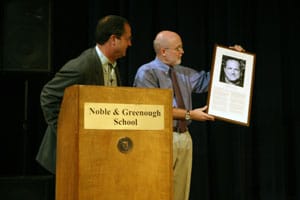 Nobles has welcomed many guest speakers to the Assembly stage. They share their life experiences and personal stories, and often visit classes to further discuss their work and how it relates to the world. On Wednesday, Oct. 12, the school welcomed “one of its own” to the Lawrence Auditorium stage—former journalist Ned Colt ’75. During that special Long Assembly, Head of School Bob Henderson Jr. ’76 honored Colt with the 2011 Distinguished Graduate Award.

After being introduced by Nate Shames ’13, who rattled off a long list of Colt’s career accomplishments, Colt began by asking the audience, “Who owns a passport?” With a quick glance, Colt estimated that 80 percent of the Nobles community raised their hands. He was pleasantly surprised, explaining that, on average, only two out of every nine Americans currently holds a U.S. passport. He credited Nobles, in part, for standing behind the benefits of travel.

During his time as a Nobles student, Colt was a contributing editor to The Nobleman, a member of the Nobleonians and a varsity rower. He graduated from Connecticut College in 1980 earning his B.A. He talked about the year in college he spent in Argentina being a “profound living experience.” He drew from this personal experience, saying that if we can step out of our comfort zones we can start to understand, even if we don’t agree with, how others live.

His career as a reporter began at a CBS affiliate in 1986 in Duluth, Minn. His job took him around the world—from Tirana, Albania, to Indonesia, and beyond. He covered a wide range of stories, including the 2004 tsunami in Indonesia, snipers in Sarajevo, and families being reunited from North and South Korea. He shared several news clips with the audience and spoke about a journalist’s responsibility to provide the facts. He urged students to see the importance of pushing themselves to see both sides of the argument based on the facts.

Colt also spoke about his involvement in public service and how imperative it is for Americans to get involved over seas. He closed the morning Assembly by challenging the Nobles community to be humble and open-minded.