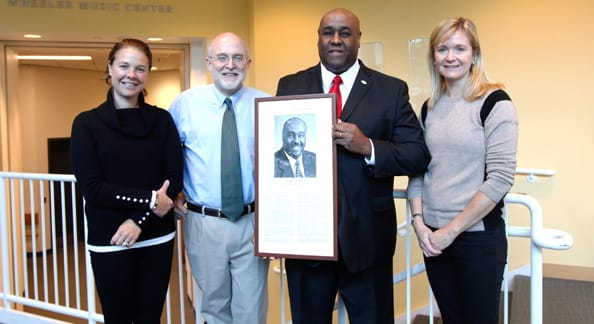 Vance is a longtime community leader. He has served on several boards in Boston, including the Yawkey Club of Roxbury (formerly known as the Roxbury Boys and Girls Club of Boston), the Roxbury YMCA, Bedford High School Site Council, Bedford METCO Parent Advisory Board and two HUD 202 elderly housing boards. In August 2013, he was named the Ruth M. Batson Advocate of the Year by the Massachusetts Council of Human Service Providers.

In addition, he is a trustee of Nobles and of the Urban College of Boston.

Vance told students that one does not have to go to Nobles to benefit from Nobles. He encouraged students to continue giving back to the community. “Keep doing what you’re doing,” he says. “It makes a huge difference.”

He noted that the Nobles community raised about $90,000 and logged 18,000 hours of service last year alone. “I am so proud to say that I am a graduate of Nobles,” he says.

“I have no doubt in my mind that every one of you in this room will do well,” he says. “But the question is ‘Will you do good?’ That’s the real challenge. Nobles prepared me to do well and I have, but the ‘good’ part, that’s what is important. You heard the long list of stuff that I do, that’s what the school is about for me.”

Read more about Vance in the winter Nobles magazine.