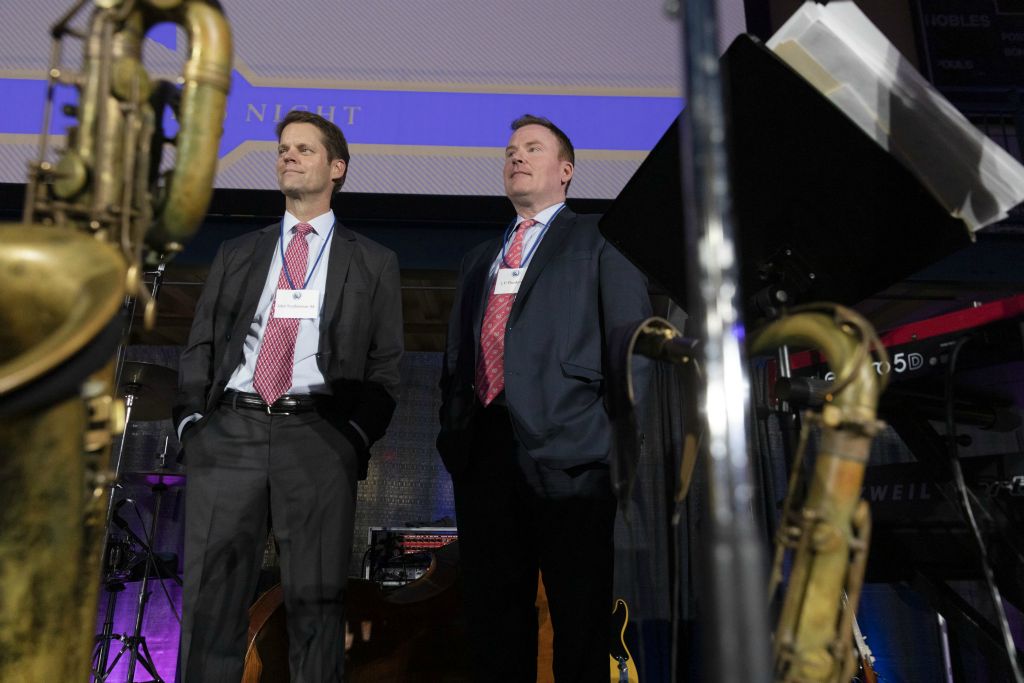 On November 6, 2019, more than 500 graduates, parents, faculty and friends gathered in the Morrison Athletic Center for Nobles Night. The celebratory evening which has become a Nobles tradition showcased the strength and collective generosity of the Nobles community. The Annual Nobles Fund (ANF) and First Class Fund for Faculty (FCFF), two of the school’s most critical fundraising initiatives each year, revealed strong early numbers for the year having raised $3,304,319 and $910,755 in gifts and pledges respectively between September 1 and Nobles Night.

In her welcoming remarks, Head of School Cathy Hall reflected on the lasting and meaningful relationships that exist at the heart of Nobles, as evidenced by the size and spirit of the audience. She affirmed her commitment to deepening and strengthening these connections by slowing down and refocusing on the school’s fundamental philosophy; sharing her mantra for the year: Relationship before task.

Hall went on to thank everyone who played a role in the early success of the ANF and FCFF, specifically acknowledging the many volunteers for their tireless efforts in support of the school’s mission. She recognized the leadership of the ANF graduate co-chairs Lawson Allen Albright ’94, and Erin Keith Epker ’90 and Mark Epker ’89; young graduate co-chairs Matt Bezreh ’08 and Ryan Ederle ’08; parent co-chairs Jennifer and Keith Palumbo, and Caroline and David Ryan; and parent of graduate chairs Helen and Neal Goins. For the FCFF committee, Hall thanked co-chairs Deanna and Tony DiNovi, Nathalie and Jean-François Ducrest, and Cindy and Seth Lawry for their service.

John Stephenson ’84 and J.P. Plunkett ’89 were announced as this year’s recipients of the Richard T. Flood ’23 Award, given annually to a graduate volunteer(s) for outstanding work on behalf of the ANF. Both have served as class agents and on their respective reunion committees, as well as were members of the Be Nobles Bold campaign committee. With grace and humor, they have educated and inspired their classmates on the importance of getting involved and giving back.

In a video that was shown as part of the program, Stephenson reminded the audience of the impact the ANF has across all facets of school life. “If you don’t have the annual fund, Nobles can’t be Nobles,” he says. “It can’t hire great teachers. It can’t do professional development for teachers. It can’t offer faculty housing. It can’t do financial aid. It is such a critical part of the process that has to be there.”

And, on an evening rooted in the power of community, Plunkett nostalgically added, “I am humbled to be a small part of this night. I am blessed to be a part of the Nobles family—to have gone here and be an active alum. I just want to thank everybody for all they do for the school because we all need to keep doing it. Go Nobles!”