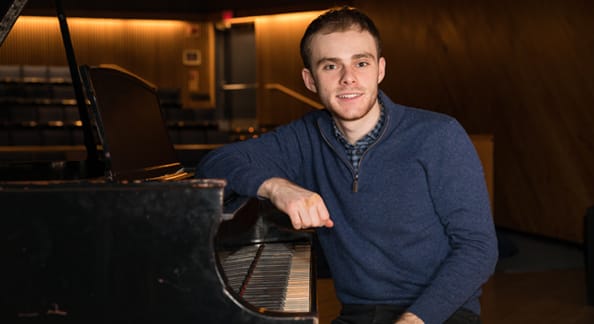 Alasdair MacKenzie ’15 jokes that he learned to play music around the time he started to move his limbs. “We had a leather sofa in the house where I was born—somebody unwisely gave me drumsticks and within a couple months the sofa had been tanned.” Now at Harvard, MacKenzie plays drums, bass, guitar, piano, and sings with New Dakotas, an indie folk pop band.

During MacKenzie’s Nobles tenure, the multi-instrumentalist likely holds the record for most assembly performances, at 100-plus, often to accompany a fellow musician or vocalist. Back in 2015, Nobles Theatre Collective director Todd Morton tapped him to direct and compose music for the NTC production of “A Midsummer Night’s Dream.” This past fall, Morton invited MacKenzie back to compose music for a character in the winter 2018 middle school play, “Gargantua.” Morton appreciates MacKenzie’s irrepressible optimism and creativity, saying, “He is, and has always been, up for new things.”

Morton discovered the play through the National Theatre’s nationwide youth theatre festival in the U.K. Each year, the program, Connections, brings together young people to perform new plays by established playwrights. In “Gargantua,” MacKenzie says, “A baby who's born already abnormally large—the size of a grown man—grows to be the size of a building. He becomes a violent Frankenstein-like presence and people try to escape. And I'm not going to tell you whether they do!” When Morton read the script with students this past fall, “Kids were always laughing, and I think that's a really good sign.”

Why did MacKenzie, a busy college student with his own band, circle back? “I like opportunities to branch out and create types of music that I haven't created before. I don’t typically write music specifically for plays or specifically for younger audiences, so it was cool to try those things.” Whether he composes solo or collaborates, the creation of the melody often inspires the lyrics. “But here, you have to pay attention to the lyrics and craft the music around that; it's a reversal of the chronology of the process that I'm used to,” he says. When writing songs, MacKenzie says, “I try to make them interesting and you know, beautiful and the whole deal, but I also try to make them bangers. My roommate’s in a band, too, and he and I like to say that we want to get the kids tapping their toes.”

For “Gargantua,” MacKenzie’s vision of a 12-year-old growling her lines à la Johnny Rotten of ’70s English punk band the Sex Pistols was a departure from his usually harmonious, melodic tunes. It was equally alien to Sixie Ava Neal, who played Dummysuckers; a soprano in Halfnotes and middle school choir, she’s unused to sneering her way through a solo. Morton says of MacKenzie’s direction, “He’s emphasizing that [Sex Pistols] style where he wants her to let loose and let it sound rough at times. It runs so counter to how she's been trained. None of these kids have ever heard of the band. They ask, ‘That’s really their name?’”

“‘Gargantua’ was one of the most fun musical projects I’ve ever done. I got to sing like a British punk rocker; Alasdair told me to sound kind of scary, like I had a lot of angst. We both have a passion for music so we had a lot to talk about, like singing in assembly and commiserating about piano lessons,” says Neal.

MacKenzie remains connected to Nobles, and speaks fondly of his time performing here as a student. “Playing in assembly was a great education in some styles of music that I would not have been inclined to play on my own. I was playing so many songs that weren't my choice and were nothing like the music that I listened to, but I was still excited for every performance.” Not that he didn’t get a bit nervous every time. “It’s probably like going on a rollercoaster, for people who like that: you know you’re going to be fine, but it’s always a thrill anyway.”  “It was especially safe and comfortable at Nobles because of how kind and receptive people were when I performed,” he adds.

MacKenzie encourages young students interested in the performing arts to overcome those jitters and rely on that supportive community: “Perform a ton and find other people to do it with, because being part of something bigger than yourself is much more fun than doing it alone, or at least that has been true consistently for me.”

On the play’s opening night, as the house lights came back on, the audience streamed out singing “Gargantua…!” in that raspy Rotten way that MacKenzie intended. Once again, he had the kids tapping their toes.