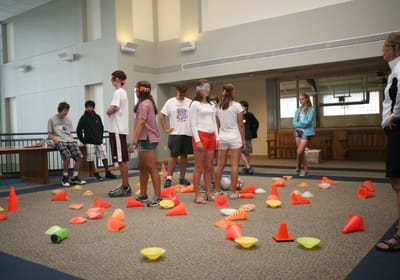 “For a school that places so much emphasis on relationship and community, the retreats allow us to begin the year with an emphasis on connection,” says Dean of Students Erika Guy. “Once that is established, it allows the community of the classroom to develop more easily.”

Class VI students—all new to Nobles—began to familiarize themselves with the school during a two-day retreat full of orientations, campus tours and activities. In small groups, students ventured around campus to complete a scavenger hunt during which they searched for venues like the Lawrence Auditorium and tracked down the counselors’ offices. A ropes course activity taught them about trust and team-building. “The first day is a fun retreat and the second day is a traditional orientation,” says Chris Averill, Class VI retreat coordinator. “This is with hopes that by the third day [of school], they’ll feel comfortable in their classes. It also allows us to have more significant advisor meetings.”

Class V traveled off-campus to Dedham Square to watched the documentary film, Food Inc., at the Dedham Community Theatre and for a scavenger hunt to learn more about the town in which their school resides. After learning about local foods, students offered their helping hands on a rainy Day Two at four local organic farms.

Both new and returning students in Class IV bonded over team-building exercises and with each activity students learn to work together effectively to solve problems. They also explored campus during a scavenger hunt and tours. In the evening, Class IV along with a few faculty members continued to get to know one another at an off-campus event at a family-fun center in Foxboro, Mass.

Classes II and III focused on a key aspect of Nobles’ mission statement: inspiring leadership for the public good. President of The Boston Harbor Association Vivien Li P’06 ’09 discussed her work over the past 20 years to clean Boston Harbor, improve quality around the waterfront area, and promote free educational services to inner-city schools and general public. Both classes also participated in off-campus community service work at places such as the Greater Boston Food Bank, Cradles to Crayons and Franklin Park Zoo.

Following another tradition, Class I spent its retreat at Camp Bournedale in Plymouth, reconnecting and reflecting on the school year ahead. Through a story-telling exercise, students reminisced and shared intimate stories of their lives. They also established goals for this academic year and attended a college application workshop. Though the day was full of scheduled activities, students did have some free time and enjoy the camp’s facilities with peers before they headed back to officially begin a busy senior year.