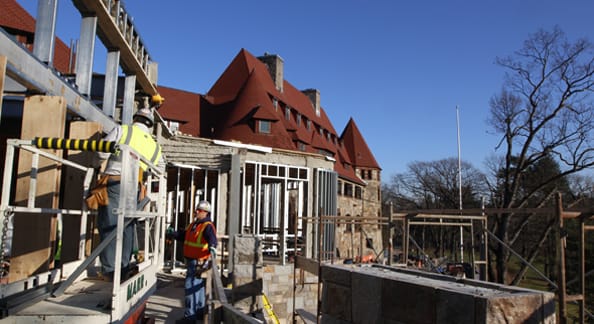 The Castle Project is on target, with construction poised to continue throughout the colder months, according to Steve Ginsberg, business manager.

As of mid-December, Jim DiMarzio, Shawmut project superintendent, reports that ledge removal, concrete foundation work and exterior utility work are complete, while interior work such as HVAC and plumbing will progress in the coming months. In addition, two new water detention ponds, which collect rainwater associated with the project, have been finished. Work expected to be complete soon is the delivery of wood (glulams) for the dining room and the full enclosure of the envelope of the 13,000-square-foot addition—significant and successful milestones.

About 50 percent of the stone required for the addition has been salvaged from the site with additional stone being sourced from Massachusetts and elsewhere in New England. The basic structure of the new outdoor terrace—which will have bluestone pavers and overlook the Charles River—is in place. DiMarzio says that he is pleased with the progress of utility work, which includes fire protection, heating systems, mechanical systems and electrical systems. He added that his crew encountered some of the building’s original 1890 electrical wiring in their system updates. (The original structure featured both gas and electric lights; electric lights were rare for the period.)

The project architects, Architerra, expect the renovated Castle, despite its expanded square footage, to use about as much energy as the structure on the original footprint and to be a contender for gold LEED certification.

Nobles Director of Development George Maley reports that fundraising for the project stands at $14 million of the $20 million goal. Castle Project completion is slated for late August 2012. See photo gallery below.