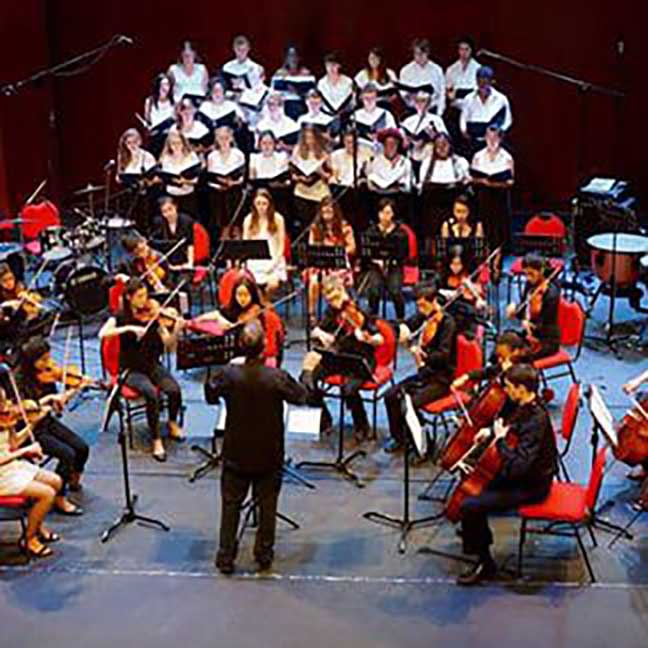 When final exams came to a close this June, 50 Nobles orchestra musicians and chamber singers, along with eight faculty members, traveled to Santa Marta, Colombia to kick off their summers with a week of musical performances and cultural immersion.

The Nobles musicians performed in a total of four concerts over the course of the week, both alongside local student-artists and for local audiences. When they put their instruments down and rested their voices, they spent time tasting Colombian cuisine, acquainting themselves with Colombian students, and exploring historical landmarks such as Quinta de San Pedro Alejandrino. The trip was a perfect archetype of cultural exchange – Nobles artists witnessed Colombian street dancers and sipped five flavors of lemonade, and Garagoa students asked to have their pictures taken with Nobles performers after they performed the song “La Piragua,” for the school. “They were like rock stars. They signed autographs and took pictures – it was awesome,” said Director of Music Michael Turner.

This trip was Music Department’s fourth consecutive tour, having traveled to Bermuda in 2015, Montreal in 2016, and New York in 2017. The music travel program began when an anonymous donor established an endowed fund for the Nobles Performing Arts program that has since funded the trips. The experience allows students to display their talents beyond Lawrence Auditorium, moving into venues such as Teatro Cajamag Pepe Vives Campo, Colegio Distrital Garagoa, and Catedral Basílica de Santa Marta with audiences as large as 600 people. They also gain the opportunity to collaborate with other artists, allowing them to grow as musicians and travelers.

“I was surprised by how much people really appreciated our music. I think music is sometimes underappreciated at Nobles. Even if it was a song we deemed ‘easy’ to play or basic, the crowd always supported us and genuinely enjoyed our performances,” reflected Talia Kee ’18 on the 2018 trip.

“The people of Santa Marta believe music is important to a strong community and show this through their investment into music…The positive environment made us play really well and made us passionate about our music,” added Niki Apostolicas ’21.

After the first concert of the tour, Nobles students and faculty saw just how central music is to the Santa Marta community when Nobles Director of Instrumental Music Antonio Berdugo was honored by the city. Berdugo, who is from Santa Marta originally, received an award for his contributions to the city’s art and culture. His family was able to attend the concert, meet his colleagues, and listen to the orchestra that he has led at Nobles.

The following day, the group performed at the oldest church in the Americas, Catedral Basílica de Santa Marta, built eight years after Columbus sailed the Atlantic. Students reflected on the concert in the trip’s blog that night: “The architecture enhanced our sound, making us sound like a full symphony… it was truly an honor to perform at such a historic landmark.” The performance at the Basílica represents the balance of musical and cultural discovery that characterized the orchestra and chamber singers’ entire 2018 tour.