Class I Projects: Eclectic and Cool

by Noble and Greenough School
Academic May 29, 2014 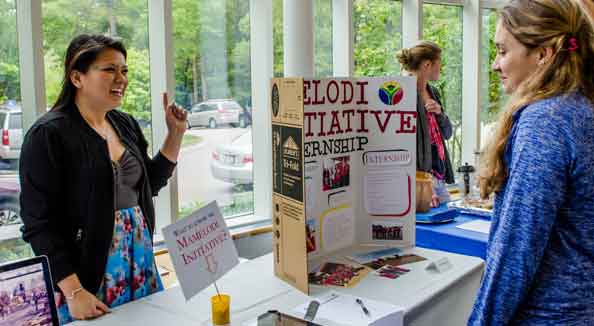 On May 27, Nobles’ Class of 2014 gathered among friends, family and faculty mentors to share a diverse group of senior projects. The evening culminated in a series of performances in Vinik Theatre. From constructing a boat out of 670 water bottles, to delving into the history of Nobles athletics or styles of hip-hop dance, students showcased their inventiveness and multiple talents. The common thread throughout the projects was connection: to each other, to their communities, to history—and to their own creativity and intellectual curiosity.

Meri Curry channeled her lifetime love of books into an opportunity to serve Nobles and fellow Putnam Library patrons by conducting market research to consider priorities for what a new library at Nobles might look like in the coming years. She found that what students want most is a facility that contains floors for completely silent reading or studying but also has areas conducive to collaborative learning and small group work.

Christopher Conway and Ryan McCarthy explored the world of video game narrative as an exciting new medium for storytelling. They investigated, assessed and analyzed the artistic capability of several games in which players choose their own story path. “Interactivity is powerful because it substantially narrows the gap between the story and audience,” Conway explained.

Other students combined science, engineering and artistry through design and construction. Will Dean with faculty advisor Dominic Manzo, built and programmed a quadcopter that reached heights of 300 feet. Dean equipped it with GPS capabilities and mounted a GoPro camera, capturing footage with a bird’s eye view of Nobles that had visitors queuing up “three deep,” Manzo recalls. “For the mentors, it's wonderful to guide students in their passion and see them get the credit they deserve. We're their partners (and limited ones at that) in their independent pursuit.”

As head of the Senior Projects Committee, Manzo says, “In the eight years I've been at Nobles, the projects have evolved from a rite of senior spring—drop classes and do something fun—to a more focused, rigorous and academically oriented program.  This is a continual process of growth, and it will be especially true as the Class I projects become part of the burgeoning EXCEL program at Nobles.”

Experiential learning literally took center stage for the second portion of the event, as the community assembled to hear musicians, writers, thespians, historians and more. Milan Chuttani introduced an original musical arrangement, “May,” inspired by his love of diverse genres of traditional and modern music. Singer-songwriters Natalie Sellers, Tom Morrison and Carter Sanders each performed songs from their upcoming albums. Kate Rosner recorded Mozart’s “Quartet #4 in C Major,” playing all four parts herself and then layering the tracks.

The evening took a quiet turn as Max Montgomery presented, “The Effect of Combat,” for which he interviewed 15 veterans to uncover truths of combat and its repercussions. Among his interviewees were generations of Nobles graduates, from George Bird ’62 to Chris Irwin ’93, as well as former headmaster and esteemed faculty member Dick Baker. “I heard many incredible stories…why they chose to serve, what combat means to them, taking an enemy’s life, and coming home,” said Montgomery. He let go of his self-described “boyish dream” of “leading the troops and defending my country,” and now better grasps the reality of service. “One of the most important things you can know and understand is the why and how of your own decision-making,” he said.

The research of John Beadle on the history of Nobles athletics examined the teacher-coach model that is central to the Nobles experience. English teacher Tim Carey, who retires this year, explained, “It allows you to make connections between what happened earlier in the day and what’s happening on the field, and take steps to rectify it.” Head of School Bob Henderson acknowledged that while increasing specialization among students and faculty poses a challenge to the teacher-coach model, Nobles remains deeply committed to the model because of its alignment with the school’s mission and values.

The short film by Brigit Bergin, Lauren Dillon and Haley Mullins, “Why Nobles Sports?” put the question to Nobles graduates, several of whom have returned to Nobles to coach. Director of Athletics and varsity girls basketball coach Alex Gallagher ’90 explains that choosing Nobles is “not a four-year decision, but a lifetime decision.”