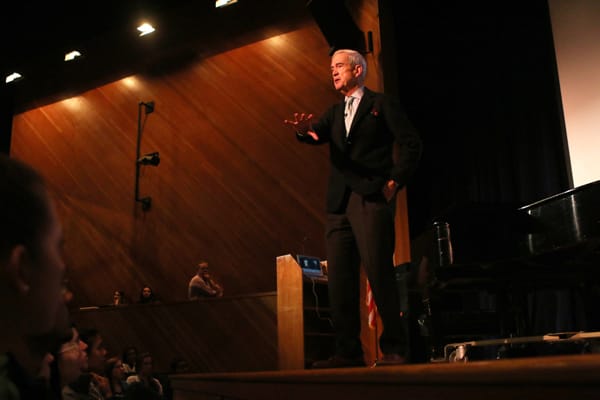 Thomas Forrest Kelly, Morton B. Knafel Professor of Music at Harvard University, spoke to students, faculty and staff at long assembly in Lawrence Auditorium on Nov. 20. His talk centered on Igor Stravinsky’s 1913 masterpiece "The Rite of Spring" and the dramatic story of its first performance in Paris—a performance that stimulated, according to some reports, rioting in the theatre and in streets.

Kelly, who graduated from Chapel Hill and spent two years on a Fulbright in France, holds a doctorate from Harvard and has taught at Wellesley, Smith, Amherst, and Oberlin prior to joining the Harvard faculty in 2000. “I convince people how lucky they are to be on a planet where there is music,” he said.

Kelly shared background on Stravinsky’s intentionally shocking and complex score with its deceptively simple patterns of repetition: “Stravinksy discovers his music at the piano,” Kelly said. “Accents are really the foundation of the whole thing.”

"The Rite of Spring" was first performed at the Théâtre des Champs-Élysées in Paris by the Ballet Russes, founded by Serge Diaghilev. Diaghilev appointed dancer Vaslav Nijinsky to choreograph the ballet—a controversial decision as Diaghilev was in love with him.

Kelly suggested that the ire of the audience during the first performance might have been in reaction to scandal over Nijinsky’s appointment—or because the music sounded dissonant to the audience—or because the ballet was not a ballet in the familiar sense: the movements indicated primitive, violent culture rather than romance. “It was a reconstruction of a prehistoric ritual,” Kelly said. This was, he said a “post-Darwinian” spring. “Nijinsky devised a ballet as unlike a ballet as a ballet could be,” Kelly said.

Kelly's main fields of interest, according to his Harvard bio, are chant and performance practice. He won the Otto Kinkeldey Award of the American Musicological Society for The Beneventan Chant (Cambridge University Press, 1989). He is a member of the American Academy of Arts and Sciences, an Honorary Citizen of the city of Benevento and a Chevalier de l'Ordre des Arts et Lettres of the French Republic.