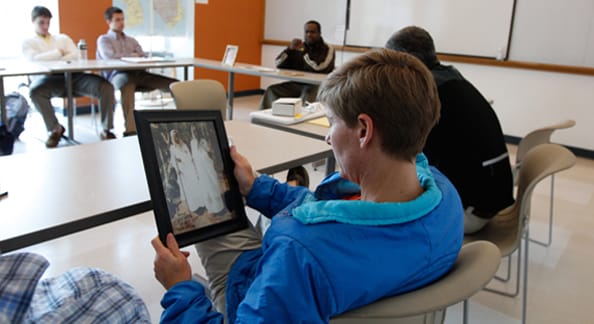 Through history books, students learn about major events, conflicts and wars that have changed the world. What history books often lack is the personal connection—stories that help students understand history through the lives of people who lived it. Two Nobles classes, History of the Human Community (HHC) and American Genocide in the 20th Century—recently welcomed several visitors who illuminated major historical and current events.

Students asked questions, which included: “Does the Israeli-Palestinian conflict affect you in your daily life?” “Can you discuss political issues in uniform?” and “Do you have Palestinian friends?”

The officers told students that although they are required to serve in the military, they are otherwise much like American students. After their service, some will reenlist. Many, like Nobles students, will travel and attend university. “I’m finishing my service in a couple months,” one IDF officer said. “Then I’m going to travel to India, Nepal and New Zealand.”

“This opportunity to speak with six officers in the Israeli Defense Forces exposed Nobles students to an array of Israeli views on various topics,” says Carlson. “It pushed our community to consider cultural and national expectations of young adulthood that are distinctly not American. It provided our students with practice in communicating, connecting, questioning and deepening understanding of others.”

On April 5, American Genocide in the 20th Century welcomed Rwandan genocide survivor Claude Kaitare. He spoke just two days before the 19th anniversary of the beginning of the Rwandan genocide.

Kaitare’s friendship with Head of the Upper School Ben Snyder, who teaches the course, began about nine years ago through an organization called Facing History and Ourselves. Kaitare returns each spring to share stories of settling in Portland, Maine, for high school; his experience of visiting Rwanda, 10 years after his escape; and the healing process of a survivor.

“I haven’t seen them [my family] in 10 years,” he said. He recalled feeling like a tourist and being treated like an American not a Rwandan.

Kaitare told students that his healing is a journey. “After 10 years, my nightmares have reduced, but I still sporadically wake up in the middle of the night fighting the people who want to kill me,” he said. But he uses storytelling as a way to heal. “I am self-medicated by talking to you guys and students from other schools—you are my therapist,” he said. “The way to heal is that you have to share your story.” His siblings, on the other hand, have suppressed memories from the genocide and the negative effects are palpable.

“When the opportunity arises for students to meet someone whose family and life were dramatically and tragically affected it brings home the reality of history in a way no book or film can,” says Snyder.  “In history there is such a tendency for schools to teach history as a set of events that 'just happened' as opposed to real events that impact the lives of real people. Both Claude and the IDF guests showed us the life changing impact that history has.”