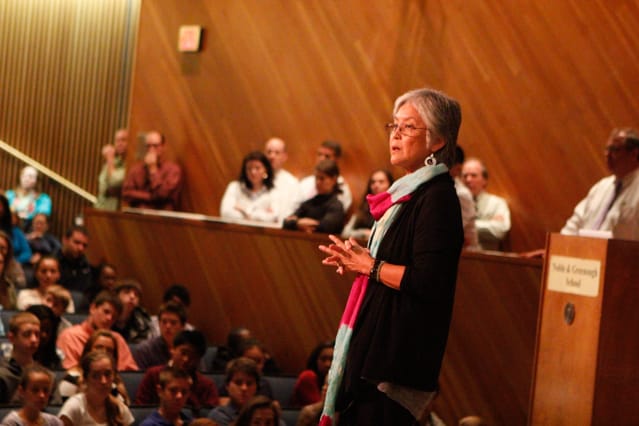 Ina spoke about her documentary From a Silk Cocoon. The film is based on her family’s more than four years in an American concentration camp during World War II: Ina and her brother were both born during the incarceration—“behind barbed-wire,” Ina said. Her talk echoed themes from the annual community book, When the Emperor Was Divine, by Julie Otsuka, also about Japanese internment.

Prompted by the discovery of a metal box full of letters after her father’s death in 1977—in all, Ina discovered 182 letters between her parents—Ina set out to better understand the years about which her family did not speak.

“It happened because of racism, hysteria and a failure of leadership,” Ina said of the government’s decision to segregate and imprison both “alien and non-aliens” of Japanese descent during World War II. She noted that the government adopted a collection of euphemisms for the government-sanctioned racism, including labeling imprisonment as “evacuation.” Many Japanese Americans, she said, refused to discuss the camps. “They felt a lot of shame about having been incarcerated and about living in poverty.”

Ina showed images of her parents, young and in love. After their marriage and following the Japanese attack on Pearl Harbor, Ina’s parents were imprisoned. A photograph by Dorothea Lange shows Ina’s mother waiting in line to get her family’s number (#1499). Ina also found in the National Archive mug shots of both of her parents. After they answered “no” to both questions on the Loyalty Questionnaire—which would have required her father to fight for the same America that was at the time holding him against his will—Ina’s father was accused of sedition.

In his mug shot, her father—a poet and a bookkeeper—was bruised, his lip cut. “I realized that I needed to know more about that time,” she said.

“I wanted to know more about why my parents said ‘No. No,’ to the Loyalty Questionnaire,” she said. “Dissonance is part of democracy.”