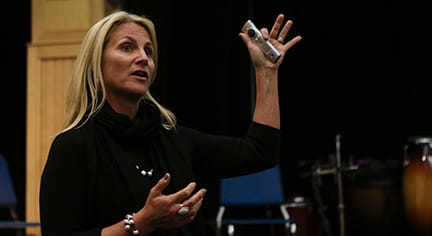 On November 18, Nobles welcomed its first lineup of entrepreneurial speakers as part of its new Innovation Series. Jodi Goldstein, director of the Harvard Innovation Lab (and a Nobles parent) moderated the event. The series is the result of her collaboration with Nobles business manager Steve Ginsberg, and faculty member Scott Wilson.

Ginsberg and Wilson attended a conference this past summer about teaching entrepreneurship at independent schools. At the same time, they connected with Goldstein. “She is one of the leaders in the field at the Harvard i-lab. She has been a great resource as we think about the program at Nobles, and we look forward to using the Innovation Series as a springboard for future programming and possible coursework,” says Ginsberg.

“Like coaching, the ‘teacher’ and students have to become comfortable with not knowing the exact direction in which the learning will go,” Ginsberg explains. “Skills like writing, public speaking, working with a team, being resilient and knowing how to iterate when things change are directly linked with this type of learning.”

“After spending 20 years in the finance and venture capital industry, I’ve come to appreciate the opportunities and risks of innovation and entrepreneurship,” adds Wilson. “Part of my motivation for the program is to expose our students to those opportunities and risks. Unfortunately, most high schoolers, including ours, see themselves on a linear path with the end reward being graduation and college acceptance. I hope one of the many by-products of this program is that our students open themselves up to the unknown and explore career paths that are totally unknown to them today.”

Prior to introducing them, Goldstein explained the purpose of the Harvard i-Lab in fostering entrepreneurship, and its partnership with Nobles. “I’m excited to get your creative juices flowing, even starting in the Middle School, so you can start innovating in your own labs. I’m eager to bring more programs, and opportunities to work alongside inventors at the iLab.”

Citing an 1876 Western Union memo in which phones were deemed a useless invention, Goldstein encouraged students, “If someone tells you you have a bad idea, definitely do it.”

The first presenters, Laura D’Asaro and Rose Wang of Six Foods, aim to “disrupt the world of food and the way we eat,” by producing tasty insect-based food products. After surprisingly tasty encounters with eating insects in Africa and Asia, both were excited about the idea of nutritious, healthy, sustainable options for their idea, and its implications for local production and conservation of natural resources.

D’Asaro emphasized, “We had to learn how to communicate, to fight, to work together as a team. At the end of the day, it’s about the values we both share–sustainability, the mission. We respect each other as people and as business professionals.”

Educating potential customers and revolutionizing their attitudes about consuming insects as an alternate protein has been the most challenging and enjoyable part of their venture. Now, Six Foods is one of the most funded food projects on Kickstarter.com.

Presenter Isaiah Kacyvenski, is a former NFL player (Seahawks), and is now the director of MC-10, a wearable electronics company. “You guys are a lucky bunch–I wish I had this when I was in high school,” he told the Nobles audience.

Kacyvenski grew up in poverty as a member of a large family. He credits a loving mother with encouraging him and his siblings to read, and for playing them Dr. Martin Luther King’s “I Have a Dream” speech once a week. The entrepreneur always kept an idea book, and constantly questioned, in looking at the world, “How could I change this? Why are things such a way?” He keeps one to this day.

The idea for MC-10 was fueled by Kacyvenski’s passion for sports and fitness. He posed, “If you could put electronics anywhere and measure anything, what would you do?” The wearable products envelop high-performance electronics in a polymer substrate to measure physiological data, creating revolutionary applications for sports, medicine, and even cosmetics.

“There’s more than one way to do things,” Kacyvenski urged. The idea crystallized and his life “completely changed” in one Harvard Physics class. “Dr. Eric Mazur took us through one problem and showed us six different ways to answer it. My life changed completely that day. Question everything; it’s at the heart of being an innovator.”

Australian-born chef Adam Melonas, like Kacyvenski, grew up in a hard-working family of few material resources, in which, “When you were tall enough to reach the washing machine, you washed your own clothes.” He remembers seeing his father, a printer, work 48 hours straight. He developed the culinary bug after choking down one too many of his mom’s rubberized steaks.

At age 15, he got his foot in the door as a dishwasher for the local Hyatt Hotel, but quickly climbed the ranks because of his scrappy attitude and fresh perspective. “Even at 15, I noticed people would say, ‘You gotta do it like this.’ I’d question, ‘What if I did it like this? How many things are you telling me can’t be done that can be done?’ I spent three years trying to disprove everything I’d been told.”
By 19, Melonas was the youngest executive chef of a fine dining restaurant in London. His culinary career also spans stints in Dubai, Shanghai, and Madrid. He calls his style of cooking, “Progressive cuisine. We invent every technique in creating a dish. We invent 32-40 course menus from the ground up.”

Nobles faculty member and Innovation Series co-creator Scott Wilson says, “Each of these speakers is pursuing a business or opportunity that they never knew existed when they were in high school. It’s apparent that it’s OK, and may even be preferable, to take the risk and pursue the opportunities inherent in small, entrepreneurial ventures–that success in an entrepreneurial environment takes the academic intelligence that Nobles fosters in our students as a given, and that what is more important than the GPA is their ability to think on their feet, problem solve, react to unforeseen events and be efficient and collaborative workers.”