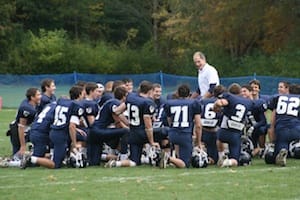 As the reigning NESCAC Class A champions, the Girls’ Varsity Soccer is prepared to make another run at the title. At the helm is first year head coach Amy Joyce ’03, who was an assistant on the team for the past two seasons. Co-captains Eliza Loring ‘12 and Coco Woeltz ‘12 have two NE and ISL championships and are well prepared to lead this young bulldog team.

The defending ISL Boys Soccer Champions are prepared to maintain their title and make another deep run in the NEPSAC tournament where they were finalists in 2010. With Steve Ginsberg's team equipped with eight returning starters the bulldogs are prepare to take on the ISL.

With a triple-OT loss to Milton last season, the bulldogs have reloaded and are ready for their 2011 campaign.  Lead by long time coach Bob Moore, co-captains Brad Rigoli ‘12, Sam Freeman ‘12, and Marco Castro ‘12 they are prepared to take on rival competition St. Sebastians, Thayer, and Milton.

One game short of an ISL title last fall, the Girls’ Varsity Field Hockey Team is poised to make another run at the championship.  With veteran coach Maura Sullivan leading the team, co-captains Alli Parent ‘12 and MK Cruise ‘12 they are set to face rival schools Thayer, Rivers, and Milton.

In their 2011 campaign, a young bulldog XC team are ready to take on New England this season.  With over 30 runners, this deep bulldog team is poised to compete at every meet this season.  Lead by veteran coaches David Ulrich and Bob Kern, the varsity XC team is prepared to take on strong ISL competition Belmont Hill, Rivers, and Milton.

The defending ISL champions girls XC team are ready to defend their title with over 15 returning runners.  Lead by veteran coach Mark Sheeran, the girls XC team looks to maintain their reputation as a top tier program during their 2011 campaign.