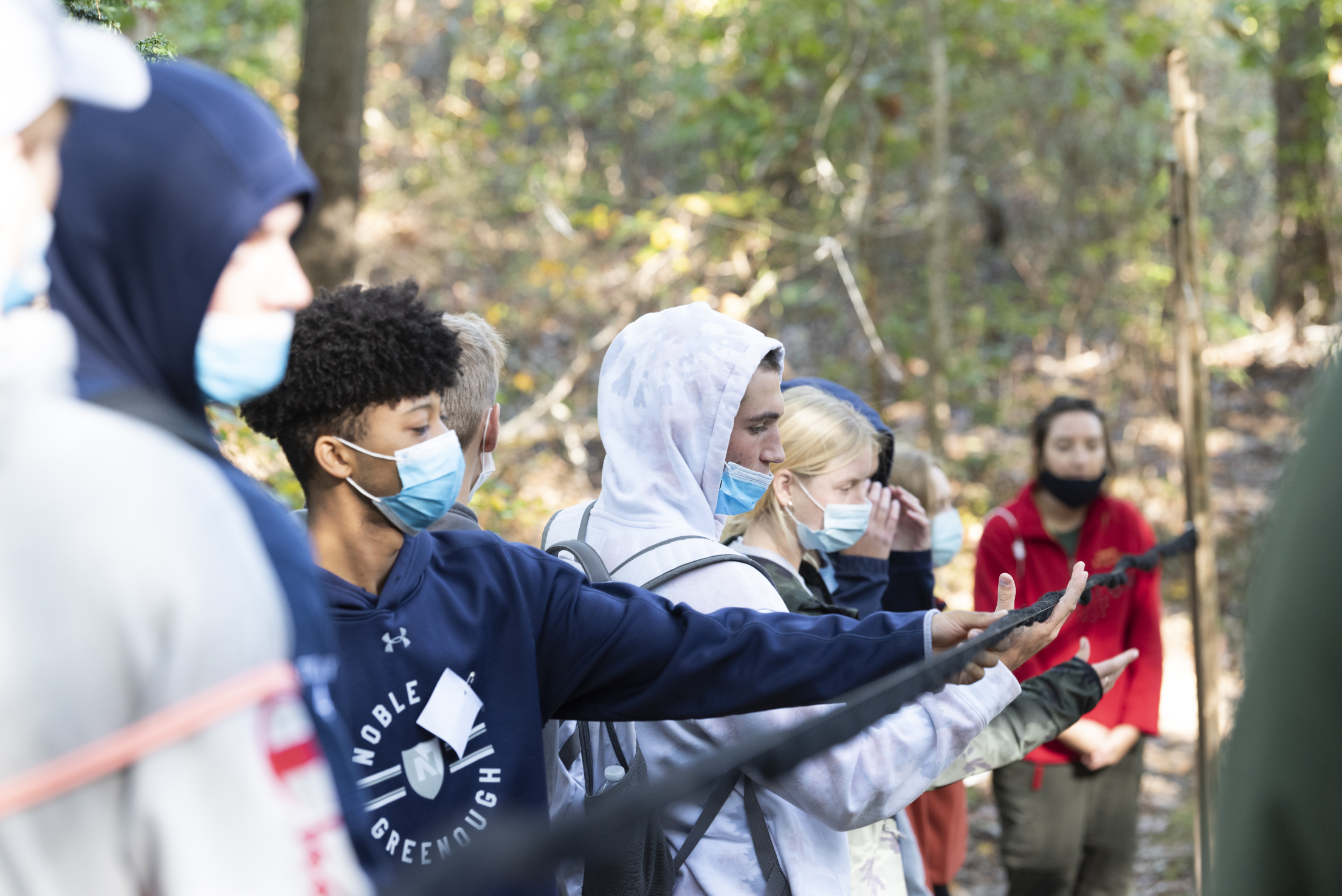 The scent of seasons switching is in the air the day that Deb Harrison and three of her AP Environmental Science classes made their annual fall migration to Manomet bird observatory on Cape Cod. During rotations with the center’s scientists and researchers, students engaged in hands-on activities that complemented their studies about global environmental indicators, specifically biodiversity.

Harrison explained, “Birds are considered to be the best environmental indicators because they tie together all the continents through their migrations.” By tracking migratory data and studying those birds which are briefly caught in and released from the center’s 50 “mist nets” in the spring and fall, Manomet’s scientists collect valuable data about species and climate to inform conservation needs.

Students simulated banders’ identification and migration data gathering techniques. After assessing their birds’ conservation status by analyzing Manomet’s 50+ years’ worth of data, students presented their findings to one another and reasons for declining populations, such as habitat loss, ecological mismatch, and climate change. Manomet has the longest running migratory land bird database in the U.S. and is highly regarded in the global scientific community as a critical resource for hemispheric and global conservation, especially regarding indicators of climate change. Banders introduced students to live birds who had been collected just that morning and their data documented, before releasing them.

Harrison and her students marveled at the release of a blackpoll warbler, their eyes wide at its aerodynamic engineering and endurance. Harrison is in “her happy place” at Manomet; it was during her first sabbatical in 1994–1995 that she volunteered with the banding program during the fall and spring migrations. Harrison has taught environmental science at Nobles since 2004; it was only natural to include a visit to this place where education and conservation converged.

“Manomet’s impact on biodiversity and conservation is on an impressive large scale (hemispheric, global) through its collaborative approach with its partners. My connection with Manomet, which began during my first sabbatical, enables me to appreciate the critical importance of environmental science and stewardship, and all that I continue to learn from it. Thus, I really value the opportunity to immerse students in Manomet’s research and educational outreach so my students gain firsthand global perspective on the vital need for this work,” Harrison said. 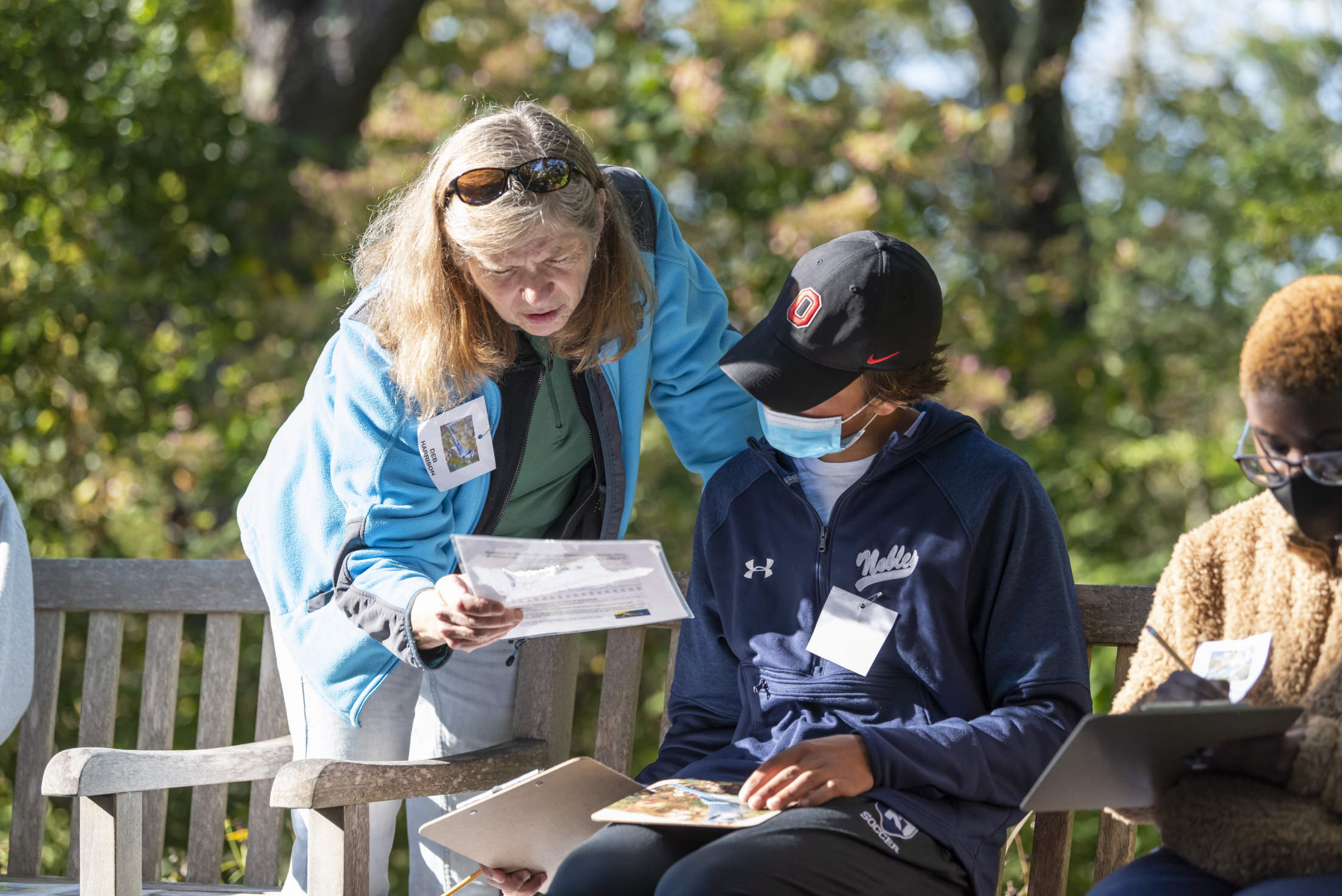 “I really value the opportunity to immerse students in Manomet’s research and educational outreach so my students gain firsthand global perspective on the vital need for this work.“Deb Harrison

Along leafy woodland trails lined by mist nets, trained researchers also demonstrated how birds are safely caught in a carefully managed way, and discussed the impact of invasive species on habitats and food sources. Dr. Molly Jacobs, vice president for environmental education and outreach, assured students that the Manomet team’s dedication to scientific integrity is intertwined with their concern for the birds’ welfare.

Each group of students also collected data for milkweed plant inventory and conducted pollinator observations of insects feeding on aster flowers to contribute data points to a new study. The center’s beekeeper shared his expertise about colony collapse disorder, and overall management of bees.

Students captivated by the day’s activities came away with a better understanding of how bird and plant species interact and reveal our human ecological footprint, and an appreciation of how scientists and researchers are marking and making change.

Listen to the recent WBUR piece about the work Manomet scientists and researchers are doing.