by Noble and Greenough School
Uncategorized May 21, 2014 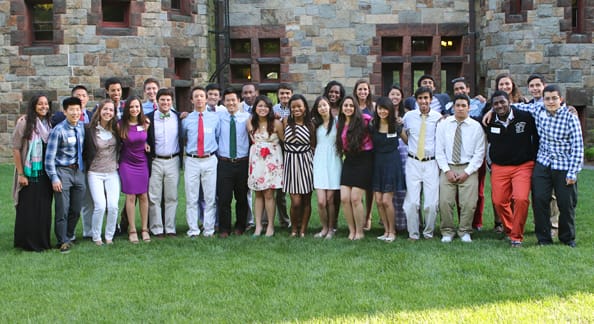 Reggie Farina ’00 returned to Nobles to celebrate the achievements of 34 Class I students of color at the 17th annual Freeman Legacy Dinner, May 20.

The dinner was named after former artist-in-residence Bob Freeman for his commitment to diversity work at Nobles. Head of School Bob Henderson acknowledged that Freeman “became a critical anchor on the faculty and the community” and “essential part of the transformation and approach to diversity [in the early 1980s].”

Farina imparted life lessons with the soon-to-be graduates and shared three stories that have helped shaped his values and beliefs.

The culture shock of attending Nobles as a sixie and as one of two black males in the middle school was palpable. He recalled the transition as personally, emotionally and academically challenging.

“It was tougher than anything I’d ever done,” he said. “The days started at 6 a.m. and didn’t end until midnight or 1 a.m.…I poured myself into my work. I was naturally afraid to fall behind because if I did, I’d never be able to recover.”

Farina told the audience that his Nobles story illustrates three important tenets of living well. Story number one: Family first. Overwhelmed with the workload, Farina’s regret was losing sight of his priority and family values, one of which included neglecting to spend time with his aunt who was terminally ill. She died before he had the chance to visit her in the hospital.

Farina said that life will continue to get busy, if not busier, but no matter how hectic it gets and how many deadlines have to be met, he urged students not to lose sight of what’s important to them.

“What is not guaranteed is the time you have with the people you care about,” he said. “There is so much I would give up to have the chance to spend more time with my aunt, my grandparents, friends and family I’ve lost. What do I take away? I’m always going to choose to make time for the people that have made me who I am, the people that inspire me, the people that challenge me.”

Story number two: Learning to fail. After putting countless hours into studying for economic statistics class at Georgetown University to complete a minor in economics, Farina failed his midterm.

“I thought that F+ would haunt me forever, and I obsessed over it,” he said. “I thought that my whole college career would be derailed by my F+ from economic statistics.”

Farina told students that failing is inevitable. “But your failures will not define you,” he said. “You will learn from them. They will help you grow and become more resilient for the next challenge. And you will realize—if you haven’t already—that you are far more than your grades, test scores, alma maters and job titles.”

Last but not least, lesson number three: Be committed to a goal. Farina shared that he was initially rejected from the MIT Sloan School of Management after a weak interview. He was devastated, but his passion and tenacity earned him a second interview.

His message? “You will decide what path you want to take,” he said. “When you do, you’ll have an amazing support network of family, friends, old teachers. But for everything that you really want, you have to decide how committed you want to be. You have to go out and make it happen.”

Farina will graduate in two weeks with a Master of Business Administration from MIT’s Sloan School of Management.

He credited Nobles for teaching him resiliency, perseverance and values of community and relationships.

“Whether you’ve realized it or not, Nobles has begun to prepare you to answer important questions you’ll face in life,” he said. “It may take stepping away from campus to get more perspective; it may take grad school; it may take failure to recognize the extent of what you’ve learned.”