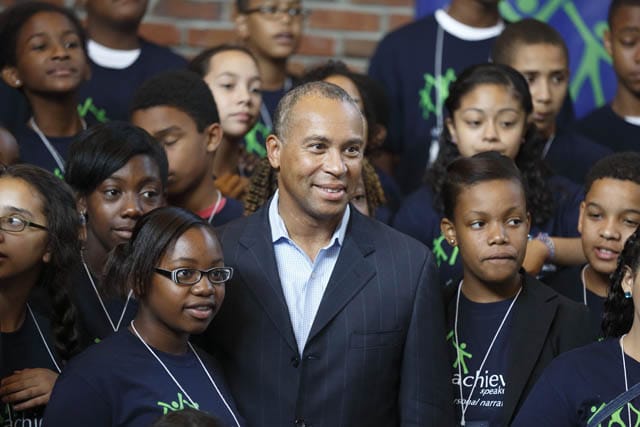 On Friday, July 28, Achieve students welcomed special guest Governor Deval Patrick—and his dog, Toby—to the Nobles campus. Patrick was invited to share his story with the Achieve community as part of the Achieve Speaker Series.

The morning began with a presentation of “Poems by Me” and a special introduction of the 71st governor of Massachusetts written by Achieve students.

Patrick shared stories of growing up on the South Side of Chicago and explained that it was “not the garden spot in Chicago.” There, he lived with his mother, sister, grandparents and various relatives in a two-bedroom apartment and attended under-resourced public schools. Despite his circumstances, he said he learned early on the importance of community.

His teachers taught him that “life in a community is [about] understanding that your membership brings with it your concern for other people’s struggles and dreams as well as your own; you have a stake in each other.” He urged Achieve students to find connections with other people in their schools, neighborhoods and within their families.

He gave credit to his great teachers and mentors. “Even in those big broken classrooms of South Side Chicago with 40 kids in a classroom, they really made us feel that they loved us and cared for us.”

Patrick went on to Milton Academy for high school through a program called A Better Chance (ABC), which his mom learned about through a seventh-grade teacher.

As governor, he shared that life in the public eye was difficult in the beginning. He pointed to the camera and journalists in the room and joked, “This is weird right?”

From Patrick’s responses to the thoughtful questions from students, the audience learned much about him from childhood to life as a governor. The event concluded with a group performance of “I know I can,” an inspirational song by Achieve students.