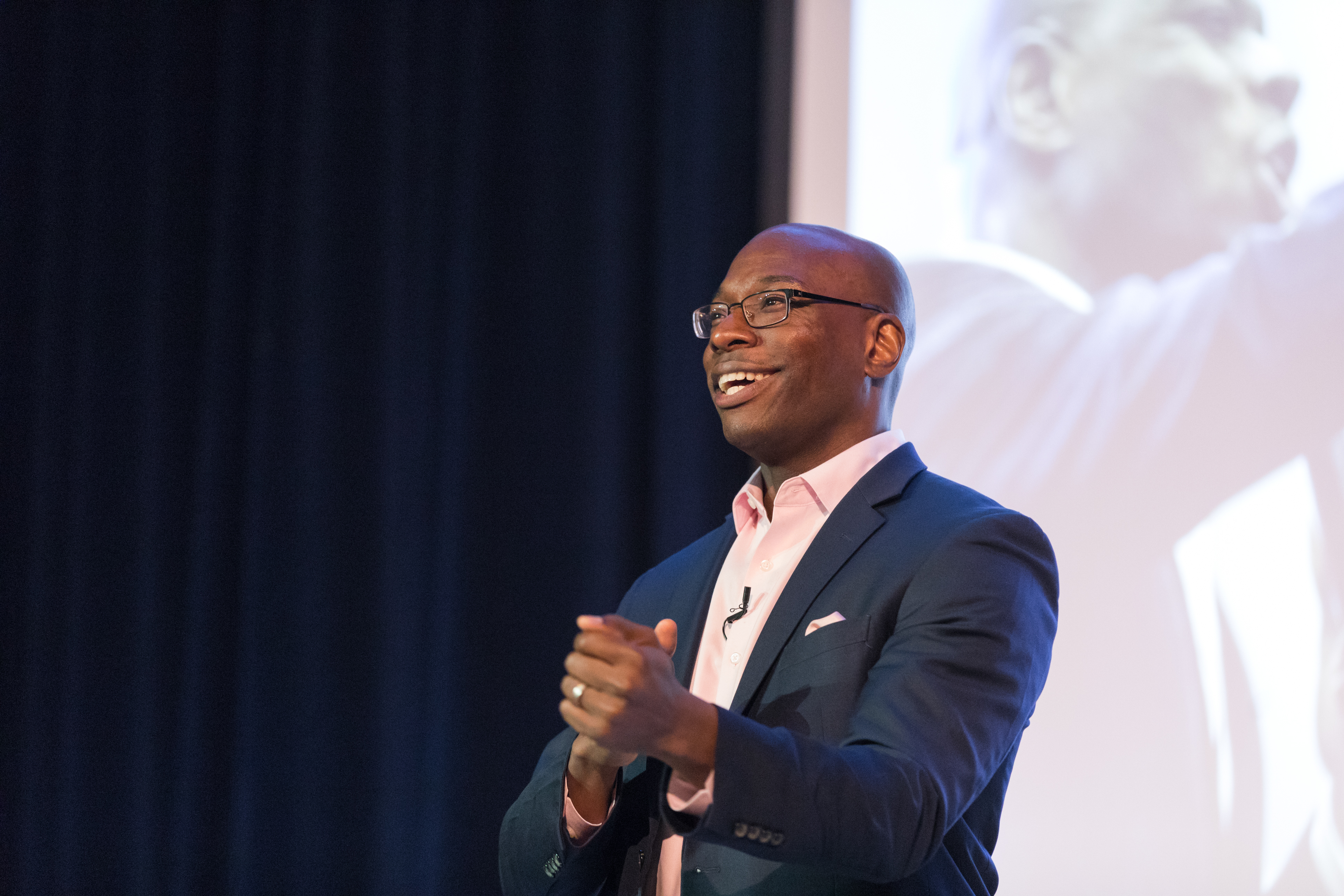 On April 17, during mental health awareness week at Nobles, mental health advocate, spoken word artist, author and TEDx speaker Hakeem Rahim Ed.M., M.A. spent a day with the community discussing personal experiences, tools and strategies to promote mental wellness. He spoke in both upper and middle school assembly, held smaller talks with groups of students in Towles Auditorium and over lunch in the Castle, and met with Nobles employees.

In 2012, Rahim began openly sharing his journey with mental illness, and has shared his message with nearly 100,000 students from middle school through college. In 2016, he launched the I AM Acceptance College Tour Campaign, a college campus tour designed to destigmatize mental illness and empower college students to take full control of their mental health. He is also the founder and CEO of Live Breathe, LLC.

Rahim queried students about perceptions and misperceptions surrounding mental health, as well as barriers to talking about it. Students named relative struggle (“someone else is struggling more than me, so I don’t have the right to say anything”); the fear of being judged, and not feeling their struggles are valid.

Rahim commended Nobles for prioritizing the conversation about mental health. Highlighting that “1 out of 5 teenagers experience some form of mental illness,” he emphasized three takeaway points:
• It’s okay to talk about what you’re going through.
• There is no shame in seeking help.
• There is hope.

Although Rahim experienced some of what he now recognizes as anxiety and depression as a child, bullied in school from grades 3-8, it wasn’t until college that his mental illness truly took hold. In the fall of 1998, he arrived at Harvard as a confident, promising freshman. He was an avid writer, popular, and joined the cheerleading squad. But this ebullient young man soon became increasingly anxious, panicky in social situations, and he began to eschew sleep for fear of losing his creativity. Even his dramatically deteriorating handwriting belied his inner turmoil.

Rahim had two manic episodes in college. During the second, he insisted to friends that he could interpret the language of the car engine, “saw” Jesus on the corner and scribbled his own prophecies. His roommate, alarmed, called Rahim’s parents, who immediately drove down from his cousin’s graduation in Washington, D.C. to bring him home to Long Island. They checked him into a psychiatric hospital for two weeks. For the first time, a psychiatrist explained to Rahim that his manic episodes, delusions, and other symptoms were indicators of bipolar disorder and depression. He left the hospital in the spring of 2000, and overcame subsequent bouts of depression with the support of his family and friends, eventually graduating with honors.

“If I thought life was over at 19, I wouldn’t have had the opportunity in 2014 to testify before Congress to advocate for other people with mental illness, or to go before the Senate in 2016 on behalf of people with mental health challenges,” Rahim said.

Rahim called out the barriers people named to getting help: internal isolation, social stigma, time, access or resources, and the challenge of acknowledging one needs treatment. But, he also offered a hopeful statistic: 80% of people who seek help for depression actually recover.

“Sometimes the best thing you can do for a friend is be available, listen, and do the little things for them that it’s hard to do when you’re depressed. It truly makes a difference,” Rahim said. He said in college it was also reassuring to know that a faculty member’s door was always open.

In addition to social support, the help of trained professionals is invaluable. “Therapy is not a conversation with a friend. You are sharing; that person is not sharing back. It’s important to find the right person to talk about your feelings with. Some just might not work out, but don’t let that be the reason you give up,” Rahim advised.

With faculty, Rahim led mindfulness activities and an exploration of the feelings about labels assigned in one’s youth. Organizer and Director of Psychology and Counseling Jennifer Hamilton shared, “It was a very open discussion with lots of time for journaling, small group and large group discussion.” Faculty learned how acceptance plays a role in mental wellness in the classroom, on campus and beyond, gaining new insights and wellness tools for both students and themselves.

Hamilton said, “Having Hakeem come to Nobles was another important step in lowering stigma around talking about mental health issues; although it can be uncomfortable at times to talk about mental health, the more we talk (and the more we send the message that it’s OK to sometimes not be OK), the more comfortable students become in seeking support for themselves or for a friend during difficult times.”

Rahim’s message to the whole community: “I want you to learn that it’s okay to talk about what you’re going through, there is no shame in seeking help, and there is absolutely hope. Keep going.”