In the Classroom: Students as Teachers 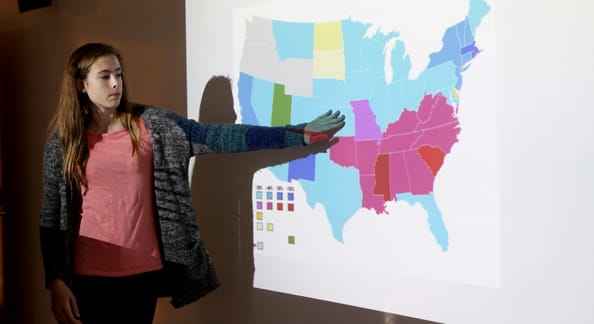 What happens when students get to be teachers? For two and a half weeks of History of the Human Community (HHC), faculty members Oris Bryant, Jenny Carlson and Sarah Plumb flipped the classroom, asking students to teach the Abrahamic religions curriculum. In groups of four or five, students taught their peers about Christianity, Judaism and Islam.

Covering topics from Protestant Reformation to five pillars of Islam to Abraham and Moses, students were charged to create lesson plans while following a guideline of terms and essential questions to cover. They worked collaboratively with their group and teacher to fine-tune the lesson. Students learned what it takes to be an effective teacher and the amount of work required to plan a class.

“She [Ms. Carlson] is really interactive,” says Jeanara Exantus ’17, so [during the presentation] we realized how much harder it was doing what she does. She kept telling us to tell stories instead of just giving facts.”

Bryant gave his students the same advice. “I tell them, ‘You really want to work on constructing a story in a manner that helps your classmates learn and remember it,’” he says. “And they also have to have an active component.”

One group presenting on Islam began the class playing Allah music and, before beginning the lecture, the group gauged their classmate’s preliminary knowledge of the Muslim religion.

To help peers retain information, in addition to lecturing, students created PowerPoint presentations, gave handouts and quizzes, showed video clips and played games such as Jeopardy, Around the World and Fly Swatter (a vocabulary game).

HHC teaches students to use evidence to support an argument whether on paper or during a presentation. For this project, Bryant tells his students early on, “Your job is to incorporate the evidence that you talk about [in your argument] because that tells me how well you understand and know the material. You make an argument and you grab the most relevant piece of evidence that is supportive of your agreement.”

Beyond the content, students take away skills that are beneficial outside the HHC classroom including presentation and public speaking skills. Students get points for making eye contact, presenting new information in addition to content from the PowerPoint, and speaking clearly and articulately. “I am a stickler for umms or likes,” says Bryant. “I point it out to them every time and now they point it out to each other.”

Throughout the project, groups are given time to reflect and assess. And in the end, they meet with their teacher to evaluate what went well, the individual’s and group’s strengths and weaknesses, and what they might do differently next time. Students also received anonymous feedback from classmates through SurveyMonkey, which will inform their next group project—the Israeli-Palestinian debate.