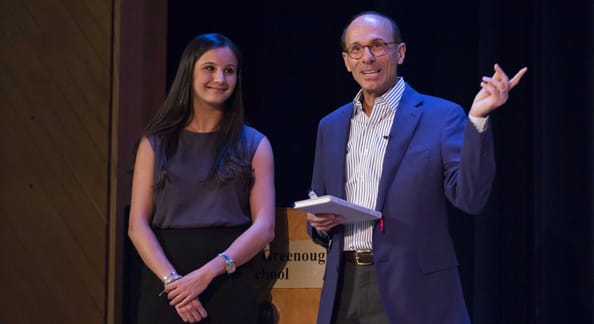 On Friday, March 3, Paul Ayoub ’74 and his daughter Lizzie Ayoub ’12 returned to Nobles to present their best-selling book Inspire Me! The book's compilation of quotations strives “to motivate, teach and inspire,” while benefitting St. Jude Children’s Research Hospital.

The inspiration to create a father-daughter quote collection came at a family gathering when the duo surprised each other with their shared love for inspirational quotes. When they decided to collaborate on a book, Lizzie remembers, “At first I thought we’d be putting quotes to construction paper with a glue stick.”

The Ayoubs are donating all proceeds from the book to St. Jude Children’s Research Hospital. The family’s connection to St. Jude’s dates back to the hospital’s origins in the late 1950s. Danny Thomas met with Paul’s father, Joseph Ayoub, and other early contributors with the idea to start a hospital. Joseph, known as “Big Joe,” agreed to help and the hospital opened in 1962. Now, his son Paul serves as Chair of the ALSAC Board of Directors and his granddaughter Lizzie performs original music at hospital events.

Paul and Lizzie organized the quotes in Inspire Me! into chapter headings labeled according to their 12 shared guiding principles of life, which include “Believe in Myself,” “Seize the Moment,” “Take Risks,” “Adapt and Change,” “Have wisdom,” and “Succeed.” As they soon realized, those principles all relate to Nobles' motto “spes sibi quisque.” As Paul told the assembly crowd, “We realized we had been bringing Nobles’ values out into our daily lives.”

In return for Nobles’ influence on the book, the Ayoubs gifted copies of Inspire Me! to every student and faculty member at Nobles. They ended by sharing some quotes from the book, including an excerpt from the graduation speech of Katherine Kirk ‘14 and Paul’s favorite from St. Jude’s founder Danny Thomas: “There are two kinds of people in the world: givers and takers. The takers may eat better, but the givers sleep better.”