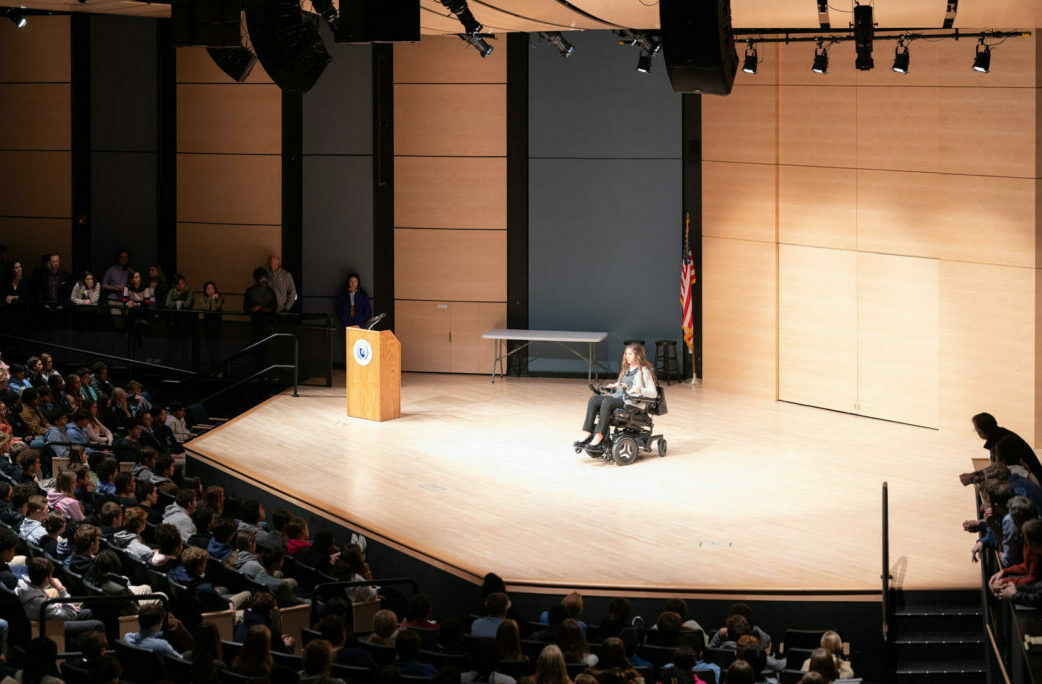 Denna Laing ’10 kicked off the leadership series at assembly this month, sharing the inspiring story about the spinal cord injury that changed the direction of her life. In his introduction of Laing, Director of Athletics Alex Gallagher spoke of Laing’s impressive work ethic. “She leads by example,” he explained, “and she includes others. She builds lasting relationships, and she exhibits brilliant resiliency.” Gallagher went on to quote Duke women’s basketball coach Kara Lawson, who compares being resilient with the words ‘handle hard better.’ “Nobody handles hard better,” said Gallgher, “than Denna Laing.”

A dorm prefect and girls varsity hockey captain while at Nobles, Laing won nine ISL championships and three New England championships before heading off to play at Princeton, where she served as a two-time captain of the women’s hockey team. After college, Laing signed with the National Women’s Hockey League, but less than two minutes into her first game with the Boston Pride, she sustained a devastating injury that left her paralyzed from the chest down.

Laing’s perspective and wisdom are a true testament to her continued and inspiring leadership. “When I was sitting in your seats I was a lot like many of you,” she said to the Nobles community, seated before her in Lawrence Auditorium. “Able-bodied, athletic, ambitious, hard-working, with dreams of doing something bigger and better.” Laing explained that—like Gallagher—she would have characterized herself as someone who leads by example. “When you look at me, I may not be your vision of a typical leader. But I have learned that being the leader is not always about how much you can do, but about how you do what you can.”

Laing made it clear that she chooses to focus on the positive outcomes of her injury, not just the challenges. “I have gotten to have so many experiences that I could not have imagined for myself before my injury,” she explained, sharing stories about connecting with hundreds of people, companies and foundations and of the many invitations she has received to be part of inspiring events, such as presenting an award at the NHL awards to participating in research with The Christopher & Dana Reeve Foundation. Laing has raised over $100,000 for organizations whose missions are close to her heart.

“My injury took a lot from me,” said Laing, “but it also has taught me a lot—a lot about myself and a lot about how it is to navigate this world with a disability, and on wheels, a lot about the importance of sharing your knowledge, and a lot about there being many ways to do something. Thankfully, though, we all don’t need to go through hardship to learn lessons. All of you, right now, have access to some of the best education available and are surrounded by people with unique and interesting stories. Take advantage of that—share with each other. And then, when you leave here, keep sharing. You never know who you may inspire, or what lesson you could learn.”