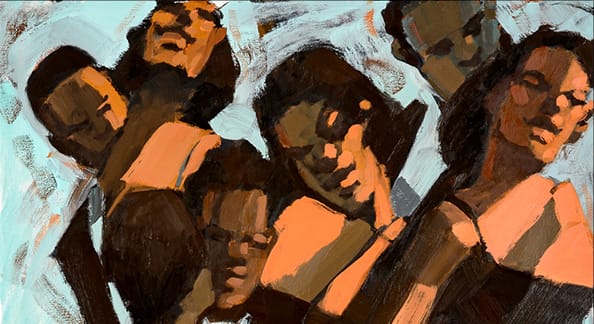 This will be his first solo exhibition in the Boston area in 10 years.

New Works explores and celebrates the complexities and grace of the black middle class. The new exhibition revisits themes from Freeman’s “Black Tie” (1981), which, Freeman has said, reflects the personal conflict he felt “as African Americans settled into middle-class life following the racial tensions of the 1960s and 1970s.”

New Works acknowledges developments in that conflict over the past 35 years while confronting remaining questions of identity and inclusion. The exhibition features two large triptychs, “The Sundowners” and “Freeman Ashanti Gold.” The first triptych depicts dancers wavering between including and excluding the viewer while the second uses gold accents to celebrate African-American culture.

Freeman joined the Nobles community in 1981 as the school’s artist-in-residence, a position he held for 27 years. Along with his wife Bettye and daughters Eva ’92, Nina ’98 and Leah ’02, Freeman became a beloved member of the school’s community. Many of his works still grace the school’s hallways, classrooms and the Castle.

The artist reception will be held on November 4, from six to eight o’clock p.m. at Adelson Galleries, 520 Harrison Avenue in Boston.