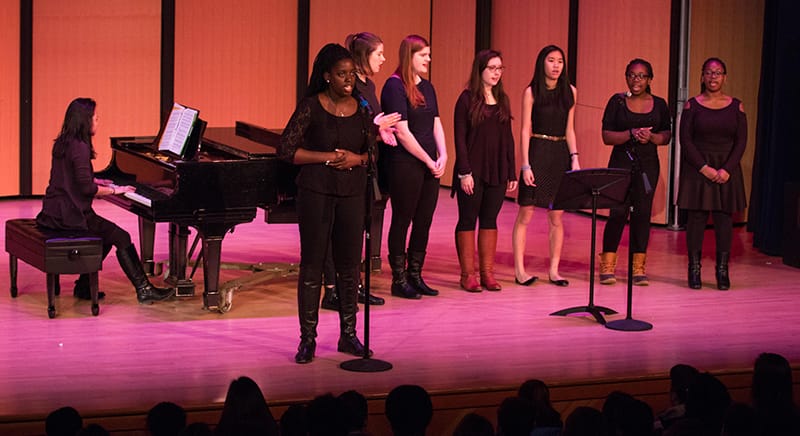 On Tuesday, January 17, a group of Nobles students took the Lawrence stage to honor the legacy of Dr. Martin Luther King, Jr. and to encourage reflection and conversation about the current status of issues he cared about in our country.

Jelinda Metelus ’17 opened the program by explaining that she and others would recognize Dr. King and the civil rights movement through song and speech, including quotes from his “Letter from a Birmingham Jail.” Metelus provided the context: “At the time, many people believed that the Movement’s use of marches, sit-ins, and boycotts was inappropriate because it incited violence from those who disagreed.”

Frannie Adams and Gigi Gabeau performed J. Cole’s “Be Free,” accompanied by Medhanit Felleke (all, Class I) on piano. Cole wrote the song in response to the shooting of Michael Brown, and the pain he felt about recurring police brutality toward African Americans.

For a portion of the program, “Voices of the Civil Rights Movement,” students took turns representing civil rights leaders Andrew Goodman, Malcolm X and Rosa Parks. Each of the historical figures confronted how they had been pigeonholed and misrepresented, and clarified what they were really about.

Gospel group Imani lifted spirits with their stirring rendition of “Glory,” by Common and John Legend. The song was the theme for the film, Selma, about the 1965 civil rights marches from Selma to Montgomery, Alabama.

The program concluded with Olivia Martin ’21 reading a final excerpt from Dr. King’s letter: “I have no despair about the future. I have no fear about the outcome of our struggle even if our motives are presently misunderstood. We will reach the goal of freedom in Birmingham and all over the nation, because the goal of America is freedom.”

Co-Dean of Diversity Erica Pernell said, “This assembly was a way for our students to connect the civil rights movement of the 1960s to the issues our country faces today. Lots of mythology has arisen about how people made positive social change in the past, and if we allow these myths to dominate our thinking, we will lose precious wisdom about how to build a society where all people can thrive. Through modern music, excerpts from 'Letter from a Birmingham Jail,' and narratives the performers aimed to bring light to stories that are often silenced or deliberately unheard.”