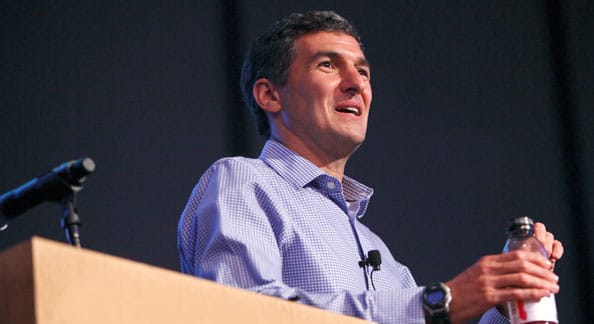 Goldman co-founded Honest Tea in 1998. The company has thrived with a new consumer emphasis on sustainable diets. When the Coca-Cola Company acquired Honest Tea in 2011, it became the first organic and fair-trade brand to become part of the world’s largest beverage-distribution system.

Goldman said that if he knew 29 years ago that he would be involved in reducing excess calories from the American diet, promoting sustainable agriculture and fair trade, he would have assumed his work was centered in government or a non-profit.

“If you had told me [that this would be achieved] through a beverage company—through Coca Cola—my head would have popped off.”

Honest Tea produces 40,000 cases of its real brewed tea every day. Goldman says that the company is focused on health and wellness, environmental responsibility and social responsibility. Goldman said that he always understood his goals but that the path to making a difference grew out of his goals and passion. The company’s first product began with five thermoses and an empty Snapple bottle at home.

“Part of being an entrepreneur is operating without all of the information,” he said.

He added that Nobles taught him to be comfortable in talking with large groups of people. “I learned that at Nobles,” he said. “I learned how to think, how to analyze…how to be part of a community.”

In reference to his lackluster wrestling career at Nobles, he said, “I also learned how to lose—how to struggle and keep fighting.”

Goldman told students that individuals like them make change, not big companies. “You are your own brand. You build your identity in the way you act [and treat others].” Goldman encouraged students to act with integrity and be bold.

On the wall of the Honest Tea, Inc.’s corporate headquarters, he said, are the words, “Those who say it cannot be done should not interfere with the people who are doing it.”

Goldman shared more than 700 bottles of Honest Ade and Honest Tea with students, faculty and staff after his talk.