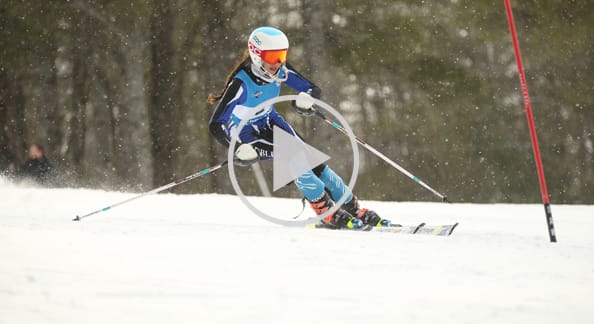 The Nobles varsity alpine ski team competed at the New England championship race on February 10 at Shawnee Peak in Maine. The girls team won the NEPSAC championship for the second time in three years and the boys team came in 11th place.

"In the morning Giant Slalom, out of a field of 65 racers, Izzy Kocher '18 finished first overall, having won both runs. Right behind her was co-captain Nicola Katz '16 in 3rd and Sophia Kocher '17 in 8th. Rounding out our five competetitors, Caroline Patterson '18 finished 16th and co-captain Maya Abouhamad '16 was 19th.

"Going into the afternoon slalom, the girls carried a 9 point advantage in first place over St. Paul's. The girls maintained their poise and came up with another fantastic team effort. Nicola Katz finished in second, Izzy Kocher placed 5th, Lilly Patterson '19 was 12th and Sophia Kocher was 18th. This extended the girls' lead over St. Paul's to 12 points, the final margin of victory."

For full NEPSAC race results, go to http://prepskiing.org/ and click Class A.

The team's final race of the season is Wednesday February 24 at 3:00 PM at Nashoba Valley Ski Area.

Check out the 2016 ski team video below.