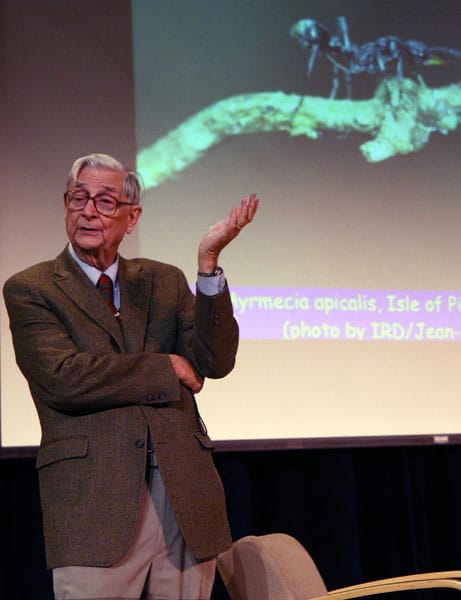 E.O. Wilson, one of the world's most distinguished scientists, spoke at Assembly in Lawrence Auditorium Jan. 11. Wilson is a professor and honorary curator in entomology at Harvard. In 1975, he published Sociobiology: The New Synthesis, a work that features ants and attempts to explain social behaviors such as aggression and altruism. Fred Sculco, retired Nobles science teacher, introduced Wilson. “It is a distinct pleasure,” he said. “[But] how do you summarize a man who stands as tall as any redwood in the forest?”

Wilson, also Pulitzer-Prize winning author, shared with the Nobles community tales from his latest adventure in the South Pacific, where he partnered with French and German scientists on the largely unexplored islands of New Caledonia and Vanuatu.
There, the man who has identified thousands of new species and named 450 of them, saw for the first time the rare kagu, a flightless bird and the only surviving member of the genus Rhynochetos. He also found an ancient and aggressive ant, the Myrmecia or bull ant. Wilson called it “an ant worth our attention—a primitive species.”

In a talk on TED, Wilson asserts the importance of insects. “If we were to wipe out insects alone…on this planet, which we are trying hard to do, the rest of life and humanity with it would mostly disappear from the land and within a few months.”

During his Nobles talk, Wilson shared photos from one of the world’s two Mesozoic forests. This New Calendonian forest hosts ancient oaks and pines. “This is what dinosaurs brushed against and ate,” he said.

Wilson answered questions from students and faculty. He suggested that humans have destabilized a beautiful and stable planet and that a cultural shift is required—sustainability must be valued. He pointed to Costa Rica as one nation that has systematically prioritized natural resources and education.

During a smaller group question-and-answer period, he talked about the potential to eradicate genetic diseases; the ethical dilemmas that will come with genetic manipulation; his view on religious creation stories; the desirability of the distribution of human genotypes; and genetically modified agriculture.

He also returned to a favorite subject: ants. “Ants are probably the most warlike creatures on earth,” he said. He then quoted William James essay, “On War.” “ 'History is a bloodbath,’ ” Wilson said.

He ended his talk with the Nobles community with this thought: “Thank you in advance for saving the planet.”