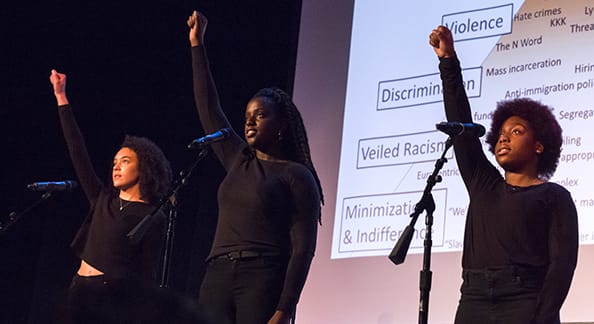 On the day after Martin Luther King, Jr. Day, Students United for Racial Justice and Equity (SURJE) led assembly with stories of resistance and offered some solutions. The program began with an explanation of the Pyramid of White Supremacy, which portrays the building blocks of systemic racism. “In a pyramid, every brick depends on the ones below it for support,” explained Priscilla Singleton-Eriyo ’19. “If the bricks at the bottom are removed, the whole structure comes tumbling down.”

Karen Maund P’18 described her first interaction with members of the Ku Klux Klan. “They looked like people I’d see at work or out on the street,” she said, “except for those red bands on their arms signifying whom they hate.” Sophie Streeter ’22 encouraged the Nobles community to support the non-profits that fight hate, such as the Southern Poverty Law Center and the Anti-Defamation League.

Streeter said that police brutality never directly affected her, until she heard the story of her cousin being wrongfully accused of stealing, wrestled to the ground, and thrown in jail for a night. Despite being well dressed, calm and innocent, the police officers saw him only for the color of his skin. Chidubem Umeh ’18 encouraged support for “better police training and systems for conduct review.”

Juli Fernandez ’18 shared the story of her family's immigration from the Dominican Republic, and the years of separation from her mother and siblings during difficulties in the process. Norah Jankey ’22 encouraged the audience to “learn more, so you can dispel myths and spread awareness about undocumented immigration.”

Jaquiline Bailey, grandmother of Kajayla Boyd ’18, remembered the desegregation of Boston public schools. Riding the bus to her new school in South Boston, she remembered men covered in white sheets throwing stones. She found a death threat on the school’s walls, which led to an evacuation. Streeter encouraged the audience to support educational opportunity programs like Beacon Academy, Achieve and Upward Bound, and policies that help fund schools in need.

Diana La Paz and Magdalena Blaise, both ’18, sang Miguel’s "How Many (Black Lives)." Devon Minor ’19 performed his poem about losing his childhood home to gentrification. Umeh encouraged support for programs that prioritize access to affordable housing in Boston, including City Life and Nuestra Comunidad.

Vikram Aldykiewicz ’19 described the first time he was pulled out of line at airport security, when he was 13 years old. “He had the ‘respect’ to call me a gentleman,” said Aldykiewicz, “even though I had committed the serious offense of skin discoloration.” Jankey encouraged the crowd to support The American Civil Liberties Union and the NAACP, and each individual to confront statements of stereotyping or generalizing. As Aldykiewicz said, “This conversation only happens if you start it.”

Madeleine Charity ’19, Mikaela Martin ’19, and Jelinda Metelus ’18 concluded with a performance of Maya Angelou’s "Still I Rise": Bringing the gifts that my ancestors gave / I am the dream and the hope of the slave….I rise.

Note: Slideshow may take a moment—please refresh page if it doesn't load.