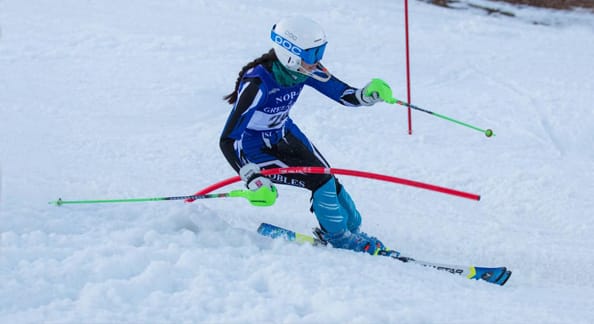 Friendship is a clear advantage helping the basketball and hockey teams coordinate movements and communicate on the court and in the rink. Team captain Amaya Finklea ’17 explains, “Even when we’re facing adversity and competition, we always have each other’s back. That’s what has helped us to win so many games over the years.”

The game of hockey has evolved so that, as team captain Becca Gilmore ’17 describes, “You can’t rely just on one or two talented players. You have to rely on every person doing her job and competing every shift.” She described teams she played on before Nobles “where one group dominated the team and it broke down how we played on the ice.”

Even the sports that center on the success of individual players, skiing and squash, benefit from close teammates. Squash captain Gracie Doyle ’17, explains, “Some people think it would be hard to find a team dynamic when it’s an individual sport, but, at the end of the day, we’re all cheering for each other.” She describes practice as “Just fun. That’s the best word I can use to describe it. It’s intense and we train hard, but it’s also fun to just be together.”

Sophia Kocher ’17, a captain of the ski team, describes her “quirky” team bonding on their daily 45-minute bus rides to and from the Nashoba Valley. One of the team’s favorite past times on the bus includes what they call “blind karaoke.” Kocher jokes, “I don’t think it’s [coach] Mr. Hollister’s favorite game,” but it involves turning up the volume on headphones so loud that surrounding sounds are inaudible, then singing along to the music with closed eyes. “We have an array of singing abilities on the team, so that’s…interesting,” Kocher laughs.

The captains also describe the teams being at their best when facing adversity. Finklea’s favorite moments on the basketball team were the games following losses. She says, “Whenever we lose a game, that next game we come back even stronger. That’s the greatest feeling to me. That’s when you know everybody has one main focus in mind. Everybody is there to win.”

Gilmore described the final game of her senior season, which ended in a loss, as one of the highlights of her hockey career. “Our final game was the best way to wrap up a season if you’re not going to win. To lose in a way that I saw my teammates show resiliency and passion and absolute love for each other is what makes it so hard to leave a program like Nobles.” After the game, she described trying to speak to the team, but being overwhelmed by emotion and crying instead. “It hit me at that moment how much this team is embedded into my life.”

Although they face adversity and loss with even greater strength, these teams are all in the habit of winning. This past season, squash finished with a record of 12-2, skiing finished 31-3, basketball was 23-3 and hockey 24-5-1. Doyle’s favorite part about winning is seeing her coach react. “It’s really awesome to see how excited Ms. Harrison gets. Obviously, we’re excited, too, but she’s so proud of us. It’s so sweet to see how happy she is.”

The captains all expressed gratitude to their foundations formed at Nobles, while looking ahead to their futures. Gracie Doyle will continue her squash career at Princeton University and Sophia Kocher hopes to join the ski patrol at Darmouth College. Amaya Finklea will play basketball at Syracuse University. Becca Gilmore will join Nobles graduates Lexie Lang ’14 and Haley Mullins ’14 on the Harvard University ice hockey team.