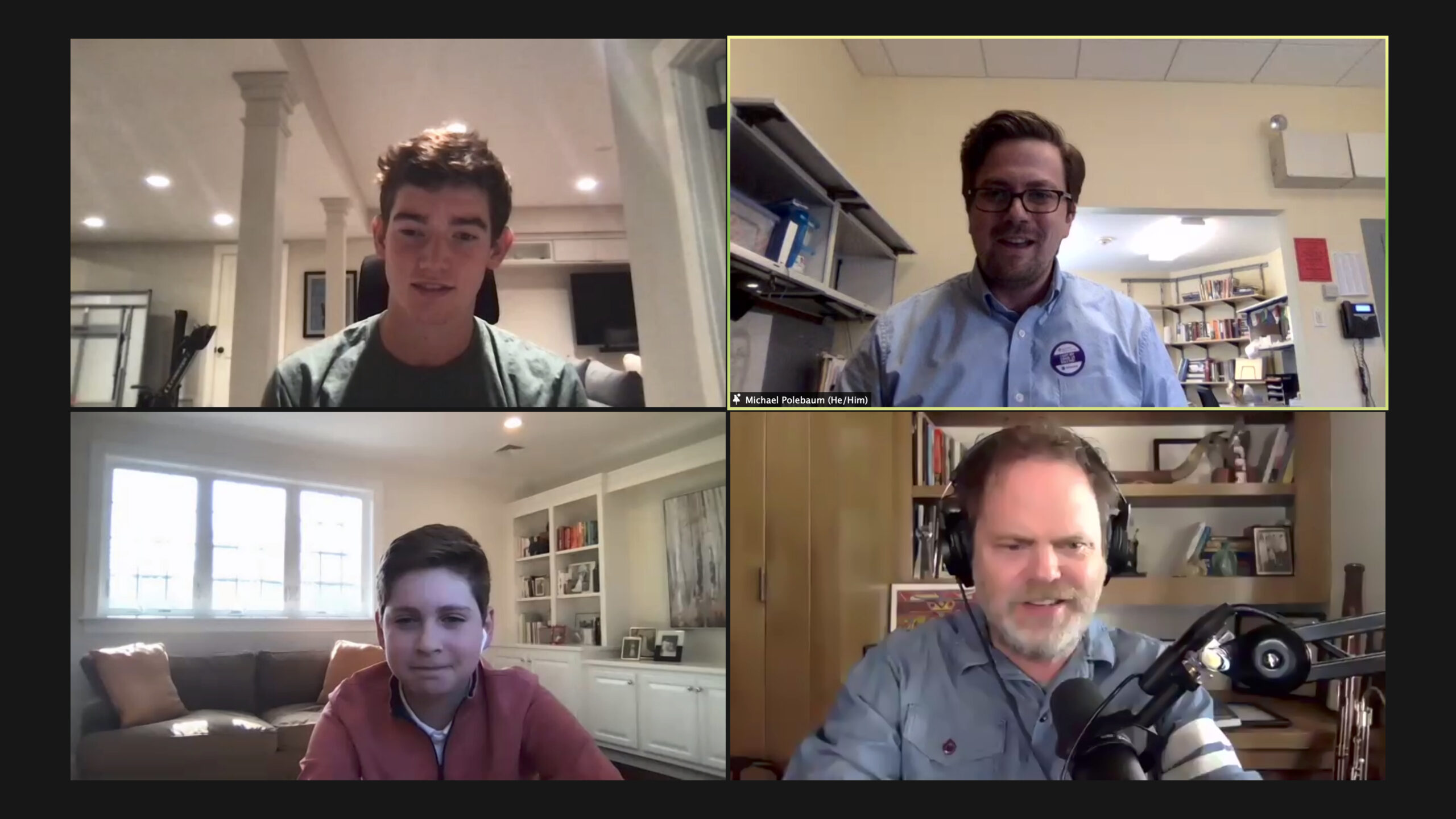 Say “Dwight Schrute,” and you’re sure to get a flicker of fond recognition conjuring this character on “The Office,” an eccentric paper salesman/erstwhile beet farmer aspiring toward middle management. To the delight of many Nobles fans of the smash comedy series, actor/writer/producer Rainn Wilson, who played Schrute, was the virtual assembly guest on April 14. Wilson, who is also known for cult classics like Galaxy Quest and blockbuster The Meg, opened up to interviewers and Office superfans Michael Polebaum ’08, James O’Connor’21, and Oliver Burstein ’25 about his trajectory in theatre—as well as his lesser known creative and philanthropic ventures. Wilson co-created feelgood digital media company SoulPancake in 2008 and published his autobiography, The Bassoon King, in 2015. His newest podcast about a paranormal talk show host, “Dark Air with Terry Carnation,” is drawing guffaws and applause.

Wilson, who got his start in high school theatre, remembers asking his drama teacher, “‘Mrs. Adams, do you think one day, if I worked hard and studied I could become a professional actor?’ And she said, ‘Oh yes, you must try, but you must travel the world’ (she talked that way all the time)… I just thought that was so brilliant that she believed in me, and that she was so supportive, because it’s very easy to be cynical and it’s really easy for a teacher to say, ‘Yeah, good luck with that, that’s a tough road to hoe there, buddy, very few make it, you’re kind of weird looking—if you were handsome like John Krasinski you’d probably be fine.’ I’m really grateful to her for the guidance and mentorship and we still keep in touch to this day.”

O’Connor, who has watched the series 16 or 17 times, asked Wilson about the show’s appeal, saying, “I still laugh just as much on number 17 as I did on number one.” Wilson said, “I think that successful TV shows are really about families, and ‘The Office’ is like a family.” While some shows are built on punchlines with only a first-time zing, Wilson said, “We were a comedy but we weren’t focused on jokes, we were focused on the characters’ reactions, and the absurdity of the situations they’re in.” That nuanced, long-term character development and their relationships with each other earned the loyalty of legions of fans.

On becoming Dwight, Wilson said, “Sometimes there are roles you just feel like you’re meant for, and have a great time with, and I kind of knew that with Dwight right away… My first audition I was like, I know who this guy is. I  grew up in suburban Seattle with a lot of self-serious dorks who are very socially awkward and kind of unaware about how they’re fitting in socially; they view themselves fitting in a certain way but actually they’re perceived in a very different way… I’ve gotten to play dozens of wonderful roles and movies in science fiction and horror and, you know, dramatic roles, and I’ve gotten to travel and do all kinds of wonderful things because ‘The Office’ opened those doors.” Those doors then led to Wilson being able to contribute to philanthropic causes, one of the aspects of his success he is most grateful for.

Burstein asked about the challenges of being in entertainment, which Wilson called “one of the hardest industries you’d ever want to be in. It is nonstop rejection, so if you have thin skin, you should not work in show business, because it’s so easy for people to say no—it’s really hard for them to say yes.” Disproving the naysayers who told him he’d never work in film and TV, Wilson overcame the negativity because “I’m a fighter and a scrapper, and I think you have to be that to make it in show business. I had a deep kind of belief in myself and I was ready to just pugnaciously soldier on, no matter what, with a great deal of willpower and determination. And that ultimately paid off. Plus, I studied a lot. I really tried to get better as an actor; I never got complacent. I was always like, how can I get better, how can I get more relaxed, more focused, find characters in a deeper, truer, more interesting way, how can I hone my craft as an actor?—and I think that’s really important for any artist.”

Burstein and Wilson also bonded over a mutual love of chess and self-described “nerdy” pandemic pastimes. “One thing Covid was good for was, I finally buckled down and bought my own bassoon. These suckers are expensive, I’ll tell you, but I love it…I was pretty nerdy in high school; I was playing a lot of Dungeons and Dragons, I was on the chess team. And one of the reasons I got into acting is then all of a sudden I did acting and I made people laugh and all of a sudden the cute girls were kind of like, ‘Oh, he’s kind of funny.’ And so at 16, I was like, screw the bassoon. Screw the chess team. So I became a full on drama nerd, but it was, but I’m really grateful for those times and yeah I’ll play anyone at your school in chess and I will crush them.”

Polebaum asked Wilson about his recent creative work, especially during the pandemic. Wilson said,  “I’m fortunate because, yes, I’m an actor but I also do writing and producing; I’ve been doing a lot of podcasting; I’m writing a book—I have a lot of creative projects to keep me busy. Here at home, it’s definitely been a challenging year for all of us, but I also have to remember that I’m a semi-retired TV actor in a very nice house, so I’m a very lucky guy.” Fully aware of his privilege, Wilson devotes his energy and resources to causes he cares deeply about. Following the devastating 2010 earthquake in Haiti, he co-founded LIDÈ Haiti with his wife, Holiday Reinhorn, and Dr. Kathryn Adams; it’s an educational initiative in rural Haiti that uses the arts and literacy to empower at-risk adolescent girls, helping them transition into school or vocational training.

Wilson integrates his spirituality and service into his daily life, for example during his recent family trip to the Grand Canyon. “We had some contacts in the Navajo Nation. So, all the neighbors, people in my Baháʼí faith community, donated food and cleaning supplies and bathroom supplies. When we rented an RV for the trip, we packed it with 500 pounds of food and brought it over to the Navajo Nation, so we got my son, who’s 16 to see like, ‘Hey, you can have fun and have a nice vacation and you can do service too at the same time.’” He has more advice for students, who are around his son’s age, facing pressures like competitive college admission. “It really doesn’t matter in the end. What matters is that you find yourself, harness your passion, be of service to others, and live a life of great integrity and meaning. And then everything will fall into place.”

Wilson believes in the benefits of mindfulness and is fascinated by the field of positive psychology. During the troubling spike in mental health crises during the pandemic, Wilson has turned to those tools. “I think the main cause of so many mental health issues in this world, in this day and age, is disconnection—so the remedy is connection. There are other ways to connect, prayer and meditation. I meditate every day, I walk in nature. Other tools that I use exercise, staying in my body, staying in my breath. These are important as well.” Positive psychology, Wilson explained, is about “what makes people happy, what makes them healthy, what makes them balanced, what gives them perspective, what gives them hope.” He contrasted it to the more traditional roots of psychology, “about what makes people messed up, what makes them anxious.”

Part of positive psychology, he explained, is the realization that “we live in a very selfish-based society: if you have more stuff, you’ll be happier; if you have more status, you’ll be happier. But actually in positive psychology when you put the pedal to the metal, those are dead wrong. As a matter of fact, people who are focused on acquiring stuff are more miserable, and people who are seeking status are more miserable, and people that are putting all the focus on themselves, are more miserable. So our whole society is constructed bass-ackwards, just 100% wrong. The focus needs to be on less stuff and more connection, less on ourselves, and more, what are we doing for others? Less on status and more on service. And if you live more in the realm of service, and connection, you’ll be happier, and you’ll live a much more rich and fulfilling life. The great religions have been saying this for thousands of years… but now science is saying the exact same thing. There’s a great pull from materialism. But this is why I do a lot of the philanthropy work that I do. I don’t really do it for that reason; I don’t do it to be happy, but once you do it a little bit, you start to get hooked and kind of like chess—you, you love the beauty of it, and love more and more to give and to serve.”

Wilson explained that one of the ideas he explores in his book is how fractured and compartmentalized our lives are, as Americans and in Western culture. “So, like, here are the things I really love to do, and here’s my job, which I like but I don’t love, and here’s my family, and here’s my church or my faith tradition. And here are my friends, and I act a certain way here, and here’s when I go on vacation—and there’s these different little boxes, right? So I think the goal is to eliminate those boxes and to live a whole integrated life where love, connection, and service are a part of everything that we do—they’re a part of our family, they’re a part of our work, they’re a part of our school.” Ultimately, Wilson says he has realized, “Whether we’re educating girls in Haiti or whether people are laughing at Dwight, whether I’m cooking dinner for my family or being of service in my faith community, or whether I’m hiking through the Cascades, you know, or playing chess, it’s all of a piece. No pun intended.”

As he closed out his talk, he quipped, “Thanks Barnes and Noble, I love you guys, I loved all the bookstores; I’m sad they’re all closing but I think you guys are great.”