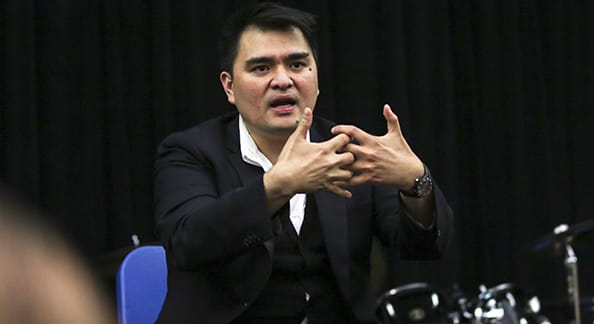 In a June 2011 essay in the New York Times, Jose Antonio Vargas shared “My Life as an Undocumented Immigrant.” In June 2012, he was featured on the cover of TIME magazine in “Not Legal Not Leaving.” On April 27, 2016—just hours after consulting with the United Nations regarding immigration—Vargas shared his story with the Nobles community.

“I am who I am today because of what happened when I was your age,” he told students in long assembly.

Vargas framed his talk on immigration and need for reform, explaining that, in 1790, what was required for citizenship was being “free, white and of good moral character.”  It wasn’t until 1924 that Native Americans were granted citizenship, he said, noting that ideas about and requirements for citizenship have changed over time. He asked the Nobles community to consider what a modern immigration system should look like.

“Why do people move?” he queried. “Nothing is more human than the desire and necessity to move,” he said.

Vargas left the Philippines at age 12 to live with his grandparents in the San Francisco Bay area. At 16, a clerk at the D.M.V. pronounced his green card a fake and Vargas discovered his undocumented immigrant status. Vargas, who is gay, found himself in two closets, he said. “I was in the closet about two things. I had to get out of one closet.”

Until the 2011 New York Times article, most friends and colleagues knew Vargas’ sexual identity—but nothing about his immigrant status. After all, he had a fake social security card. He had even passed a screening by the Secret Service before interviewing the Japanese prime minister in the White House.

Before his second and more public coming out, Vargas had written for the New Yorker, the Washington Post, the Huffington Post and other prominent media. He won a Pulitzer Prize for his Washington Post coverage of the Virginia Tech shootings, and he profiled Mark Zuckerburg for the New Yorker. In preparation for the publication of his New York Times essay, he called the Department of Homeland Security and asked whether they planned to deport him and why. The response, Vargas said, was that Homeland Security declined to comment on individual cases.

During the Nobles assembly, Vargas offered information about immigration in the U.S. and sought to shift the popular narrative from one focused on the Mexican border, overcrowding and menacing behavior to a more accurate set of facts: The fastest-growing group of undocumented immigrants is from Beijing. Many immigrants pay taxes and have collectively contributed over $1 billion to social security, and border crossings are at their lowest since the 1970’s, he said. In Massachusetts alone, the Asian and Latino populations have doubled in the last 20 years. “All of the changes are something that all of us have to face,” he said.

He also objected to the word “illegal” in reference to people. “Do you know of any other instance when we call people ‘illegal?’” he said. “I am here illegally with no authorization. I, as a person, am not illegal.

“I think that every country has the right to define and defend its borders,” he said, asking students and faculty to grapple with the complexity of the issue and recognize the need for a more factual, humane and nuanced understanding of the issues.

“What I do a lot is listen,” he said. “For me, it’s really important for all of us to realize that the world doesn’t revolve around us,” he said.

Vargas asked the Nobles audience to be willing to be uncomfortable and talk about issues such as race and class. In addition to his work as a journalist, Vargas is a filmmaker. He directed and starred in the documentary White People. In 2011, he founded Define American, a nonprofit aimed at facilitating dialogue about immigration issues; he has worked closely with the tech advocacy group, FWD.us on immigration reform.