What’s in a Game? 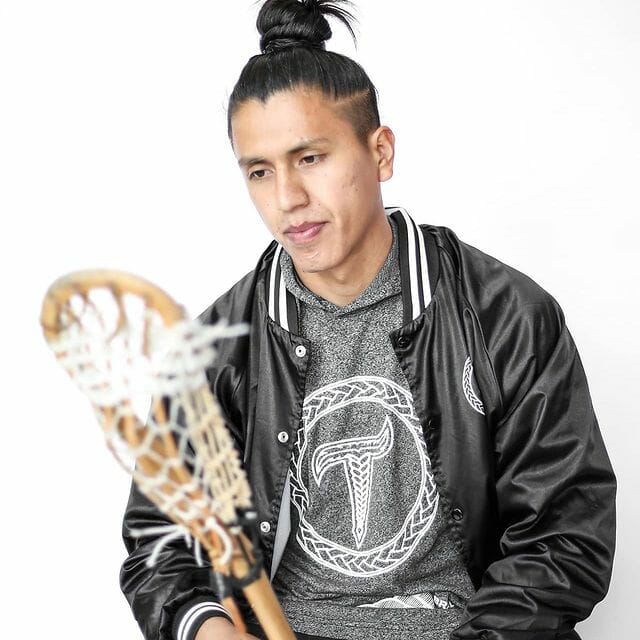 One might think that the perspective of a world-famous lacrosse player would be too narrow for the wider Nobles audience, too focused on the elements of a game that only a portion of the students play. Have a seat with Lyle Thompson, and that perspective shifts immediately. History teaching fellow Abby Kelly, a long-time friend of Thompson’s, interviewed him during the long assembly on December 9. Thompson is a professional lacrosse player in both the MLL and NLL and played division 1 lacrosse at UAlbany, where he still holds the record for most points in Division 1 history, and he also won the Tewaaraton Award, given to the most outstanding college lacrosse player, two years in a row. Thompson grew up on the Onondaga reservation in New York, one of the six nations of the Iroquois Confederacy, and has played lacrosse since he could walk. His three older brothers also play professional lacrosse, and together they are known as some of the best lacrosse players in the world. What students, faculty and staff gleaned from Thompson’s visit had less to do with the catalog of successes Thomson has had in the game of lacrosse, however, and more to do with the spiritual nature of the game and the opportunity it has given him to bring about change.

When introducing Thompson to the Nobles community, Kelly explained that he is “incredibly dedicated to playing the game of lacrosse for the reasons it was created, as a medicine to heal both internally and spiritually. He has used his platform to become a spokesperson for the true meaning of lacrosse and what the sport means to Native people. He has spoken out against discriminatory practices in the game of lacrosse and has also used his voice to address the history and current state of the misappropriation, identity, and the sovereignty of Native American people, and is one of the most well-respected lacrosse players across the board.”

Thompson began by talking about the importance of his cultural heritage, sharing that he always introduces himself in his full Native language and that he and his three brothers all chose to keep their hair long when given the choice to cut it at the age of eighteen. “We’re proud of who we are—we’re proud of where we come from,” he shared, adding that his platform in the lacrosse world also gives him an opportunity to educate about the current struggles within Native communities. “I just want to use my voice to stick up for what’s right,” he said. Thompson’s own grandfather had some incredibly difficult experiences at boarding school, where he was prohibited from speaking Mohawk, the only language he knew and one that was forced out of him over time. This trauma was passed down to Thompson’s parents, who then had to work hard to “revitalize” that culture for him and for his brothers. “It’s got to be in our history books,” Thompson emphasized. “We can’t be just doing it one month out of the year, sharing these true histories that were hidden from America.”

Thompson has a deep connection with the sport of lacrosse, and not just because of the many accolades he has received, but because of the people who supported him and because of the profound significance that the sport holds for him. When asked about his mentors, he quickly mentioned his father and brothers, adding that he also looks to the sport itself as a mentor. “I personify it,” he says. “I believe it has a spirit. It’s taught me so much.” Thompson went on to explain that lacrosse has always been “like therapy” for him, “like medicine.”

Listening to Thompson talk, one would never know of his remarkable success as an athlete who is idolized around the world. Editor-in-chief of Lacrosse Magazine, Matt DaSilva, has referred to Thompson as a “once-in-a-generation player with otherworldly lacrosse talent.” You do not have to look far to find similar comments of praise and admiration for Thompson’s skill set on the field, but more often than not he is also applauded for being such a strong role model for future generations. Humble and introspective, in his discussion Thompson focused on his appreciation for the sport and on the responsibility he feels to use his success to affect change. He consistently came back to his deep appreciation for his family and for his Native community—for all that they have endured, and for all that they have taught him.

Thompson’s father always preached “playing with a clear mind,” but there was one instance during a game when racist remarks were made about his long hair and he admits to letting that interfere with his play for the first time in his life. “I used my platform to make sure that it was heard and to let people know that these things happen—that there is this racism in sports, and especially for people that have colored skin,” he explained, adding that he was actually glad this incident happened. “It happened for me,” he said, “it didn’t happen to me. I’m not taking it personally. I learned a lot from it. But I can pass some of the things I’ve experienced on so that it can stop. I’m an optimist; I believe it can get overcome, and it will stop. It just takes a lot of expressing ourselves and being in our truth.”

The Thompson brothers, who are all sponsored by Nike, have recently started an organization called “4 the Future Foundation,” which encourages student-athletes to lead an active and healthy lifestyle. Kelly explained that the Thompson brothers “create programs for Indigenous and underserved communities where lacrosse meets culture in order to provide opportunities for kids to achieve their dreams.” After the first segment of the assembly, Thompson stayed on to speak with lacrosse coach Matt Rowley and discuss more technical aspects of the game for those who were interested in hearing more about his approach to the game of lacrosse. Thompson’s visit offered a unique perspective on the stories that sometimes exist beneath the helmets of athletes, the stories and struggles that sometimes stray from the norm and are not always heard. While Thompson touched on the many difficult challenges that he and his family have faced, his constant optimism served as a reminder that speaking truth can bring about change.