When There Are Nine 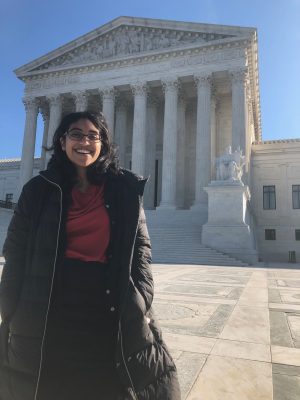 The assembly crowd let out a collective gasp when Anushka Harve ’20 took the stage to say she had just returned from Washington, D.C. and a meeting with Supreme Court Justice Ruth Bader Ginsburg (RBG). Her iconic status has indisputably reached rock-star levels. Acclaimed 2018 documentary, RBG, produced by an all-female filmmaking team led by Betsy West and Julie Cohen, chronicled Ginsburg’s determined ascent in the face of constant sexism—and often, anti-Semitism.

Harve, who joined Nobles’ Class of 2020 as a sophomore last year, shares Ginsburg’s legal passions, among them, women’s rights. When she and her mother researched summer opportunities, Harve applied to pipeline program “Just the Beginning” (JTB) and attended their Summer 2018 Legal Institute in Springfield, Massachusetts. JTB states, “For many students, particularly students of color and those from low-income backgrounds, the path to law school or a successful legal career is not always clear,” and that they endeavor “to illuminate that path by lighting the spark of recognition that it is possible to become a lawyer and a leader.”

During the institute, Harve learned about the law and potential professions within the field, and participated in a mock trial in Springfield Federal Court. She has long loved history and explains that the legal profession runs in her family, from her grandfather, who was a high court judge in India, to several lawyers. “To me, the best thing about the law is the visible impact you can have. It can be so noble, especially when you do pro bono work,” Harve says.

Nine students from the JTB program were selected to go to Washington, D.C. on Thursday, October 25, 2018. Coincidence? Ginsburg is well known for saying, “There will be enough women on the Supreme Court when there are nine.”

Harve is modest about the honor, and lights up when she recounts meeting her role model. “I love women’s rights. That’s why it was so amazing to meet RBG. I would specifically want to help women who have been victims of domestic abuse and rape. Issues like these should not be partisan.” Her first impression upon seeing RBG was that “she looks like my great-grandmother in India.” Upon going up to ask a question, Harve tripped and she and Ginsburg laughed together about it.

Brimming with questions, but knowing she would not be able to pose them all, Harve asked Ginsburg, “You’ve been known for fighting for women’s rights (both in your political career and in your personal life), so what do you think the next big hurdle is?”

Harve remembers crying when she left, thinking, “It was such an honor and a privilege. It gave me some renewed faith about the world and how important the law is and our systems are. There has been a lot of controversy about what’s moral, and while we have a lot of faith in RBG, we have to take a lot of responsibility and fight for our rights. Whether I choose to become a lawyer or not, this is such an impressionable tenet of the United States.”

Harve praises the JTB program, which, because it is offered at no charge, is “helping kids who don’t have the systemic advantages to see the opportunities they have and to go into the field of law. They taught us it doesn’t so much matter what your background is; the world is your oyster. It really provides a continued relationship and valuable networking.” While she would love to do it again, true to the sense of social justice that runs in her veins, Harve says, “I would want every kid to have this opportunity—I wouldn’t want to take that from someone else.”

Arnav Harve, Anushka’s younger brother, is a member of the Class of 2023. She would want him and everyone to know, “The issue of women’s rights is not just for women, because it’s not about being above men, but equal to men. We all have to take up the charge for change to occur and to bring about equality.”