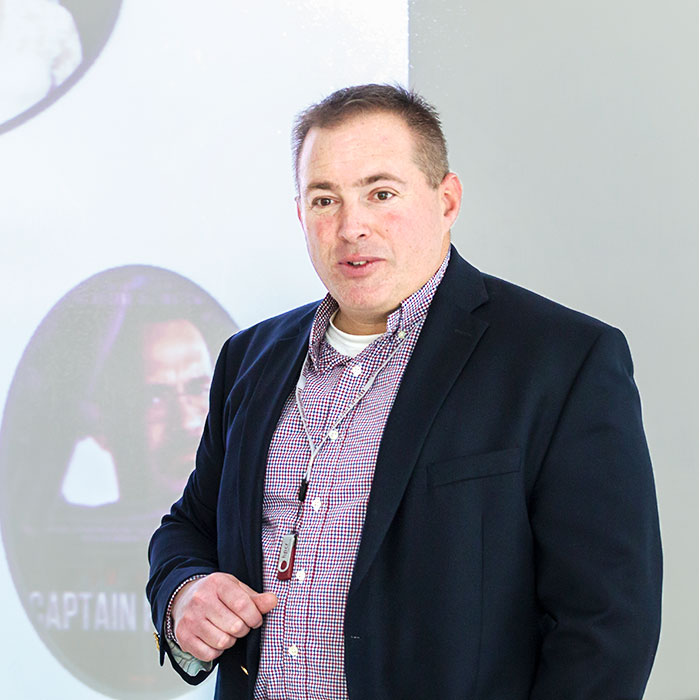 George Cadwalader ‘88, a retired Lieutenant Colonel of the United States Marine Corps and current professor of emergency management at Massachusetts Maritime Academy, visited History of the Human Community classes to discuss the importance of studying China.

Cadwalader’s lecture spanned China’s historic, military and economic relevance to American and worldwide interests. As Cadwalader explained, China and America have intertwining histories, from the communist revolution, which he explained was seen as an “existential threat to our security” to the lingering issue of Taiwanese independence.

Currently, China’s expanding population and limited space is increasing tension between China and the nations that surround it. As Cadwalader explained, “When countries get too crowded, they start looking to expand their borders. Population drives policy.”

China also sits near some valuable and contested sea space. Although China claims to own the “cow’s tongue” of the South China Sea, America considers that area "the high seas" essential to global commerce.

Cadwalader also explained how America and China are “attached at the hip” economically. Our mutually dependent relationship centers on American debt owed to China and Chinese dependence on the U.S. market for China’s goods. Although America is frequently concerned about China’s increasing nuclear capabilities, Cadwalader said “China wants to make our involvement in any local issue cost prohibitive for us.”

The lecture inspired some interesting conversations with the crowd, including debates about the possible diplomatic effectiveness of American citizens boycotting Chinese goods. Cadwalader expressed doubts that any country could make such a unified effort against such an important economic influence and ended by emphasizing that “everything is connected. If the American or Chinese economies fail, the world economy will fail.”