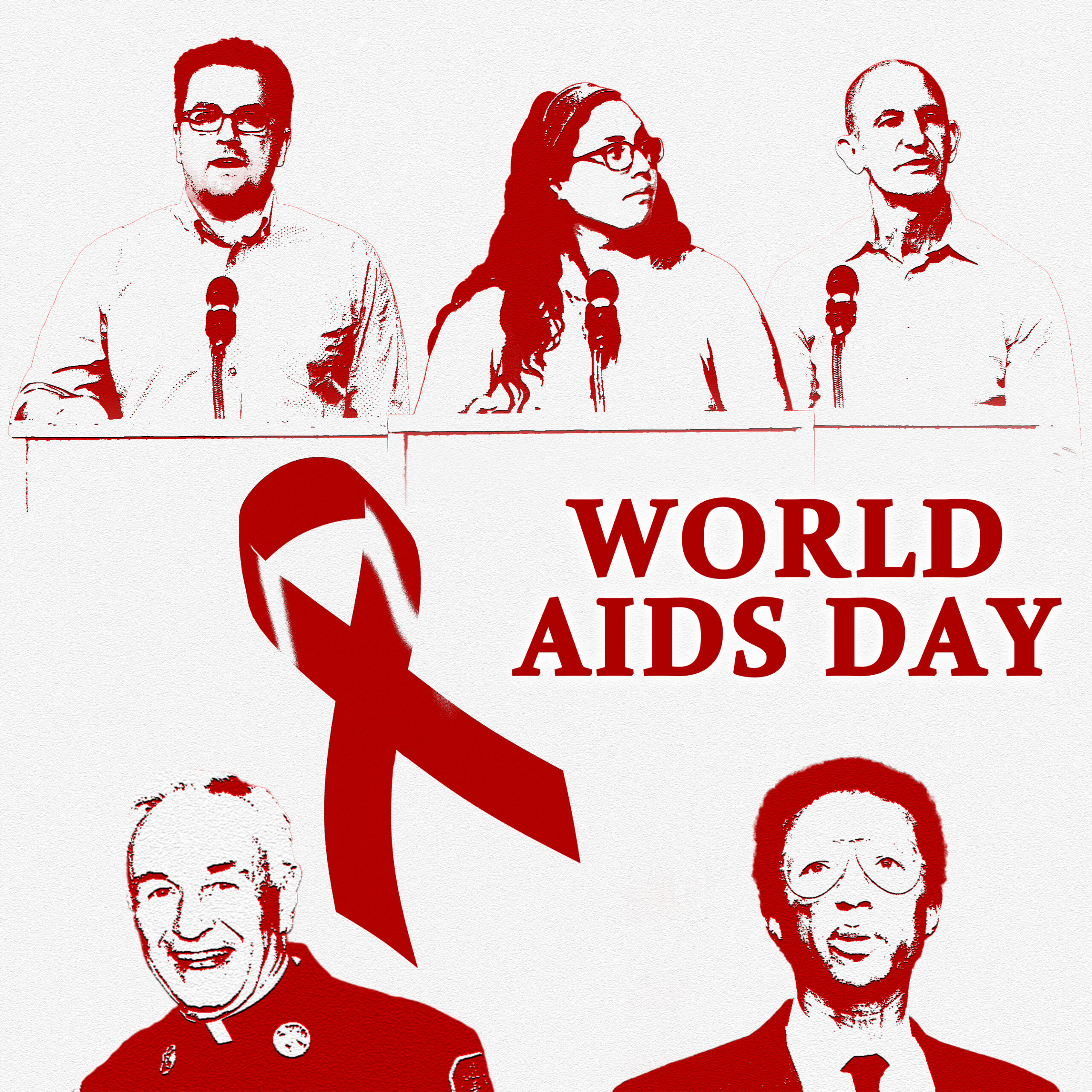 For World AIDS Day on December 1, faculty members Louis Barassi and Talya Sokoll spoke in assembly about two prominent figures who worked to bring more compassion and awareness to help those suffering from AIDS: Father Mychal Judge and Arthur Ashe.

In the early 1980s when AIDS was terrifyingly new and its victims were stigmatized, Franciscan priest Father Judge provided comfort and solace to many of these young people, starting an active AIDS ministry and working in the city’s first AIDS ward at St. Clare’s Hospital. “At a time when many people were afraid to be near people with AIDS, including many doctors and nurses, and AIDS patients were often spending their last days alone and isolated,” said Sokoll. “He wasn’t afraid to be with them in their last moments, rubbing their feet, holding them in his arms, and reassuring them as they died that they were going to Heaven.”

On September 11, 2001, while serving as FDNY chaplain, he was killed when the South Tower of the World Trade Center collapsed, and he was recognized as the first victim recovered from ground zero. “At a time when many people were led by fear in how they viewed and treated people with AIDS, Father Judge led with love,” said Sokoll. “I find the story of Father Judge, although incredibly sad, to also be inspiring.  He devoted his life to helping others, showing love and support for people even in their toughest moments, and I felt it important to recognize him today. “

Arthur Ashe was a world champion tennis player and the first black man to win a singles major, let alone three grand slams. On World AIDS Day 30 years ago, he emphatically addressed the UN to call for more funding for AIDS research. This was a pivotal moment for a widely respected straight man to speak out about the stigmatized disease. He had contracted HIV from a blood transfusion during heart surgery in the early ’80s, and he died three months after speaking to the UN.

In the early ’90s, Barassi was teaching at the Marymount School in New York that Ashe’s young daughter attended. One day when Ashe visited to read during parent storytime, Barassi happened to walk by and the headmistress encouraged them to meet due to their shared experiences with adoption (Louis’ being adopted, and the Ashes’ having adopted their daughter Camera.) “What I remember most about that encounter was meeting a devoted father who so clearly loved his daughter, and an unpretentious gentleman who made me and everyone else he met that day feel comfortable in his presence,” said Barassi.

Later after his diagnosis, Ashe returned and spoke about reserving judgment and finding empathy during a school assembly. Barassi said, “I can still clearly remember the courage and grace Arthur had demonstrated in that school assembly. And while I know my former colleagues and students were deeply impacted by what he said to us, his comments resonated with me in a very personal and particular way. As a young gay man navigating my identity at a time when it was easy to feel marginalized and despondent, Arthur’s words and example gave me hope, and over time helped me believe I could lead my life honestly, openly and with dignity.”

Faculty member Michael Polebaum ’08 introduced the assembly by acknowledging that he had many privileges, but noted that one thing he lacked was a community of elders because AIDS had devastated a generation of gay men. He quoted Tom Hanks’ Oscars acceptance speech for portraying a gay man with AIDS in Philadelphia saying, “the streets of heaven are too crowded with angels.” However after realizing that when he had inspiring people like Louis Barassi, he did in fact have a community of elders to call his own.