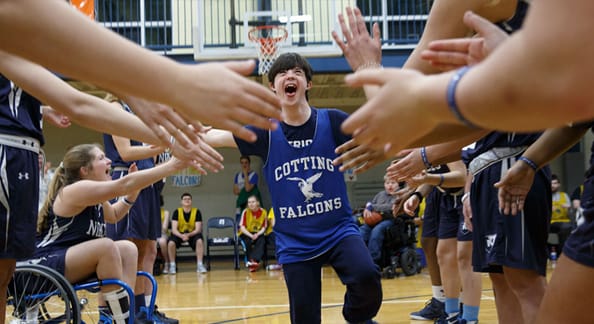 Members of Nobles girls varsity basketball team call the annual Nobles vs. Cotting School game the highlight of their season.

The January 6 matchup between Nobles and the Cotting School, a private special-education day school in Lexington, Massachusetts, marked the 10th anniversary of the relationship.

Will Randle '09, whose sister attended the Cotting School, made the original connection between the two teams. This year, the Cotting School traveled from Lexington for the annual game, which was held in the Rappaport Gymnasium within the Morrison Athletic Center on Nobles campus.

The evening included the unveiling of a Cotting banner in the gym, honoring the important relationship between the schools.

Click through the gallery below to see highlights from the game.