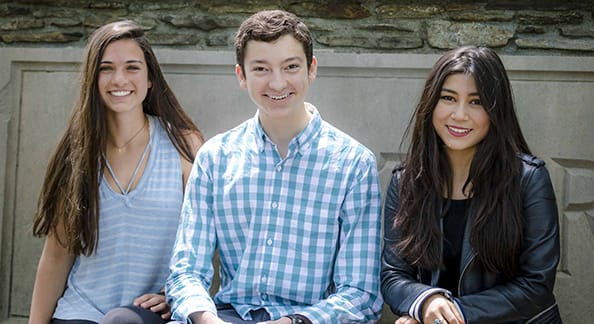 1. Innovative and scholarly inquiry. Students are encouraged to move past common topics into new and specialized historical terrain.

3. Organized, vivid and efficient expression. Students spend one-third of the six-week project period revising and editing their manuscripts according to Chicago/Turabian style and documentation guidelines.

Receiving High Honors this year were Calli Bianchi for her paper, "Look Like Ladies, Play Like Men," Nathaniel Birne, for "The 1941 Disney Studio Strike: How Nine Weeks Transformed Walt Disney's Ideology," and Clara Guzman, for "GI Babies and Their Unique Post-War Role in US-South Korean Relations."

For links to all three papers in their entirety, please visit this community page.

Baseball is known as America’s national pastime. Everyone has heard of the Curse of the Bambino, or Bobby Thompson’s “shot heard round the world,” or Ted Williams’ 406 batting average, but, to this day, an important part of baseball history remains forgotten. During World War II, when many men were at war and couldn’t play baseball, Philip Wrigley created a women’s league. It was founded in 1943 as the All-American Girl’s Softball League, but in 1946 it was changed to a baseball-softball hybrid in order to attract more fans. The name eventually became the All-American Girl’s Professional Baseball League. The league started out with just four teams in the Midwest and peaked at ten teams in its 1948 season. Female ballplayers from all over the country tried out to play in the league. At its pinnacle, the league had nearly one hundred thousand fans. Eventually, when the men returned from war, its popularity declined and the last season was played in 1954.

One might think that this league advanced gender equality in America. In reality, the All American Girls Professional Baseball League undermined gender equality because the league’s policies objectified women and reinforced strict gender role stereotypes.

On the morning of May 29th, 1941, Walt Disney drove to his California studio just as he would on any other day. He must have known what to expect—the previous night, members of a labor union known as the Screen Cartoonists Guild had decided to strike “by an almost unanimous vote,” and word had already spread to the major newspapers. Nonetheless, the scene that materialized as Disney approached his studio would forever remain etched in his memory. Three hundred of Disney’s employees swamped the building’s entrance, chanting slogans into speakers and waving hand-drawn posters.

Despite these protesters’ clear-cut complaints, Disney rejected the notion that he was in any way responsible for the strike. He published an ad in several Hollywood newspapers to inform his workers that, “you have been misled and misinformed about the real issues underlying the strike at the studio. I am positively convinced that Communistic agitation, leadership, and activities have brought about this strike.” …Disney’s insistence that the strike was devised by communists provokes an intriguing question: Why did the 1941 strike have such a powerful and lasting effect on Disney’s ideology?

Longingly, Jang has a “lifelong wish” that is in her own words, “to meet my father.” Recently, Jang Yeon Hee took a DNA test in the hope of finding her American father who left her pregnant mother in 1954 and “never bothered to visit again to see me.” Jang is one of estimated tens of thousands of so-called GI babies born to American soldiers and Korean prostitutes as a consequence of the Korean War. GI babies faced lives “filled with a sense of alienation, racist attacks [from Koreans in Korea] and longing for their birth parents.” Left in Korea, Jang and other GI babies were doomed to “lonely and impoverished li[ves]” due to their “lowliest roots.” Her poignant story typifies the fate of GI babies who did not have the good fortune to be adopted by Americans. The vast majority like her (95%) wished that they had had the chance to move to America during the era of 1953 – 1960 when thousands of mixed-raced children were “exported” to America.

GI babies comprised the very first wave of postwar adoptions because “Amerasians had the most urgent needs” and their adoption by Americans served multiple, mutually beneficial purposes both for Korea and the United States.

What motivated you to explore the area of history you did?
"I recently watched the movie “A League of Our Own” and was surprised to hear about the All American Girl’s Professional Baseball League for the first time. I have always been a baseball fan, but never knew that a women’s league existed. I saw the research paper assignment as a good opportunity to explore this forgotten piece of history."

What was the most surprising thing you learned in the course of your research?
"Before I even began my research, I was planning on arguing a point that is the complete opposite of my final thesis. My original research question was focused on how the AAGPBL advanced women’s role in society. After researching the topic, I was surprised to discover that the league might actually have been a step backwards for gender equality."

Did your findings change your understanding of or attitudes toward your topic? If so, how?
"Although I still admire the women who played in the AAGPBL, my attitude towards the league as a whole has definitely changed. I had always viewed it as something that broke down gender barriers and stereotypes. After researching the topic, I discovered that this was not the case."

What motivated you to explore the area of history you did?
"When Mr. Jankey assigned the research paper, I had no idea what I wanted to write about. I created a list of about ten topics ranging from Babe Ruth to Betty Crocker, and narrowed the list down to the handful of subjects I was most interested in. After briefly researching each one, I decided that Walt Disney had the most potential as a paper topic. I have always enjoyed Disney movies, and Walt Disney seemed to be a much more complex character than his friendly, “Uncle Walt” persona would suggest."

What was the most surprising thing you learned in the course of your research?
"I was surprised to learn that Walt Disney was so clueless about the effect that his leadership had on his workers. In 1941, Disney’s dictatorial and irrational style resulted in a strike at his studio. However, Disney refused to accept that he was to blame, and instead claimed that the labor dispute was a communist-inspired scheme."

Did your findings change your understanding of or attitudes toward your topic? If so, how?
"Understanding Disney’s films in the context of his life definitely adds depth to the experience of watching them. Now, when I watch a Disney movie that was released during the 1930s or 1940s, I am able to consider how Disney’s personality and ideology might have influenced the content of the film."

What motivated you to explore the area of history you did?
"Being of Korean heritage, I have always been curious about the culture and about the Korean-American’s experience in the United States, especially post-Korean War. Both my grandfather and grandmother came to the US in the late 1950s as graduate students, but I was very intrigued by the adoption of thousands of half-Korean half-American GI babies during that period. The US History paper was a great opportunity for me to research and learn more about Korea, the US and both societies’ attitudes at the time."

What was the most surprising thing you learned in the course of your research?
"If you look at Korean and American cultures today, the difference between then and now is almost unbelievable. Today, we take for granted multiculturalism, but back in the 1950s, Koreans felt strongly about racial homogeneity and Jim Crow laws were still in effect in parts of America."

Did your findings change your understanding of or attitudes toward your topic? If so, how?
"I’m very grateful that America is the melting pot that it is today, and I think that I better appreciate the struggles that our parents’ and grandparents’ generations endured."