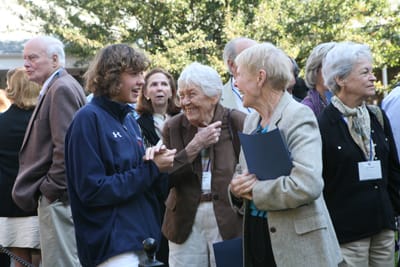 More than 435 grandparents gathered on campus on Friday, Sept. 30, to experience for themselves a typical Nobles day, complete with classes, art exhibits, performances and athletic games. No “day in the life” at Nobles would be complete without morning Assembly, so grandparents settled into the seats of Lawrence Auditorium at the start.

After the audience enjoyed a performance by the Nobleonians, the school’s male a cappella group, and heard about the current show of eclectic art in the Foster Gallery, Roberta Weiner, grandmother of Zachary ’17 and Rachel ’16 Janfaza, took the podium. She joked that while her grandchildren endorsed Roberta and husband Stephen as Grandparents’ Day representatives, they implored her not to embarrass them. Good advice for all grandparents, she pointed out.

Weiner is certain that most Nobles graduates look back on their time at the school with many fond feelings and deep appreciation. This is because, she said, Nobles “fosters an appetite for lifelong learning” and a commitment to “leadership for the public good.” Weiner spoke proudly about the role that all grandparents play in the lives of their grandchildren. She and Stephen, along with daughter Melissa and her husband Andy Janfaza (a Nobles graduate, Class of 1984), are delighted with the experience Nobles offers its students.

Head of School Robert P. Henderson Jr. ’76 welcomed grandparents and recounted a bit of school history, including the move from the school’s original Boston location to the Dedham campus in 1922. At that time, the entire school day happened in the Castle, which is currently under construction. "The building belongs to everyone equally,” Henderson said. “It is the heart and soul of campus.”

Henderson reiterated Roberta Weiner’s words about the school’s mission to inspire leadership for the public good. He encouraged grandparents to experience the day through their grandchildren’s eyes, but with the future on their minds. “We want our graduates to commit themselves to making the world a better place.”

With that, the crowd dispersed onto the Beach to connect with their grandchildren and embark on a busy—and inspiring—day.