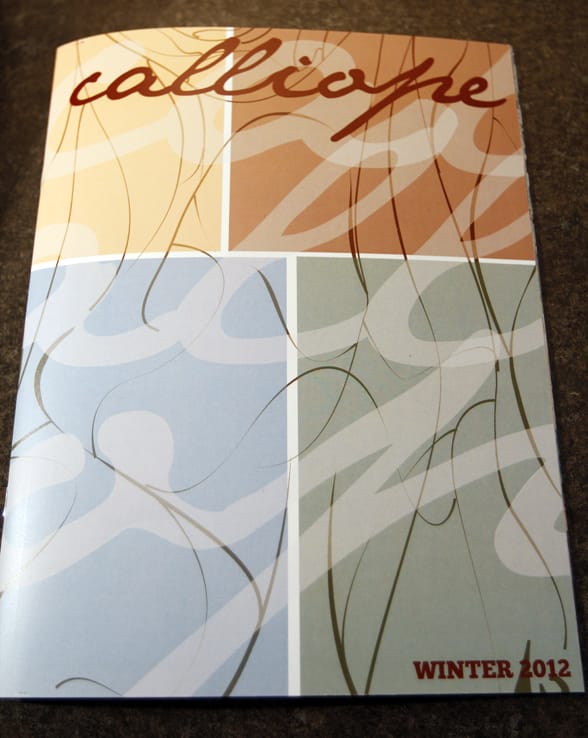 Student artists and writers just released the winter issue of Calliope, the student literary and arts magazine. Editor-in-Chief Isabella Kursh ’12 explains that this edition highlights what’s happening in the arts at Nobles such as the Photo II class field trip to Boston’s Occupy Wallstreet Movement. Compelling photographs by students including Abbey Anderson ’14 and Cyrus Veyssi ’13 present the protest as “organized chaos” in a “little village.” This issue also features student drawings, feature stories, profiles and poetry. Mad libs and music recommendations add a fun twist to the publication.

Formerly known as Calliopé, the first issue of the year dropped the accented “e,” changing the pronunciation and signaling an updated spin to the magazine.

Enjoy a poem below by Hannah Nash ’13.

Today I hear emotion, and I cannot
know its source,
but it manifests in his fingers and like
liquid
it travels gracefully, from the ivory and
through the black
to resonate and produce a sound
of tranquil nostalgia.

A hidden memory, like a spotlight
glowing
from within the scenic backdrop;

And then it begins to speak more slowly,
voicing gentle sympathies,
caressing like a mother’s warm embrace,
The rest dissolves but the member
lingers;

And I remember one time digging in the
garden
when I plunged my hands amidst the
earth
and lived for days upon days thereafter
with the dirt fixed under my fingernails.