A Point of View 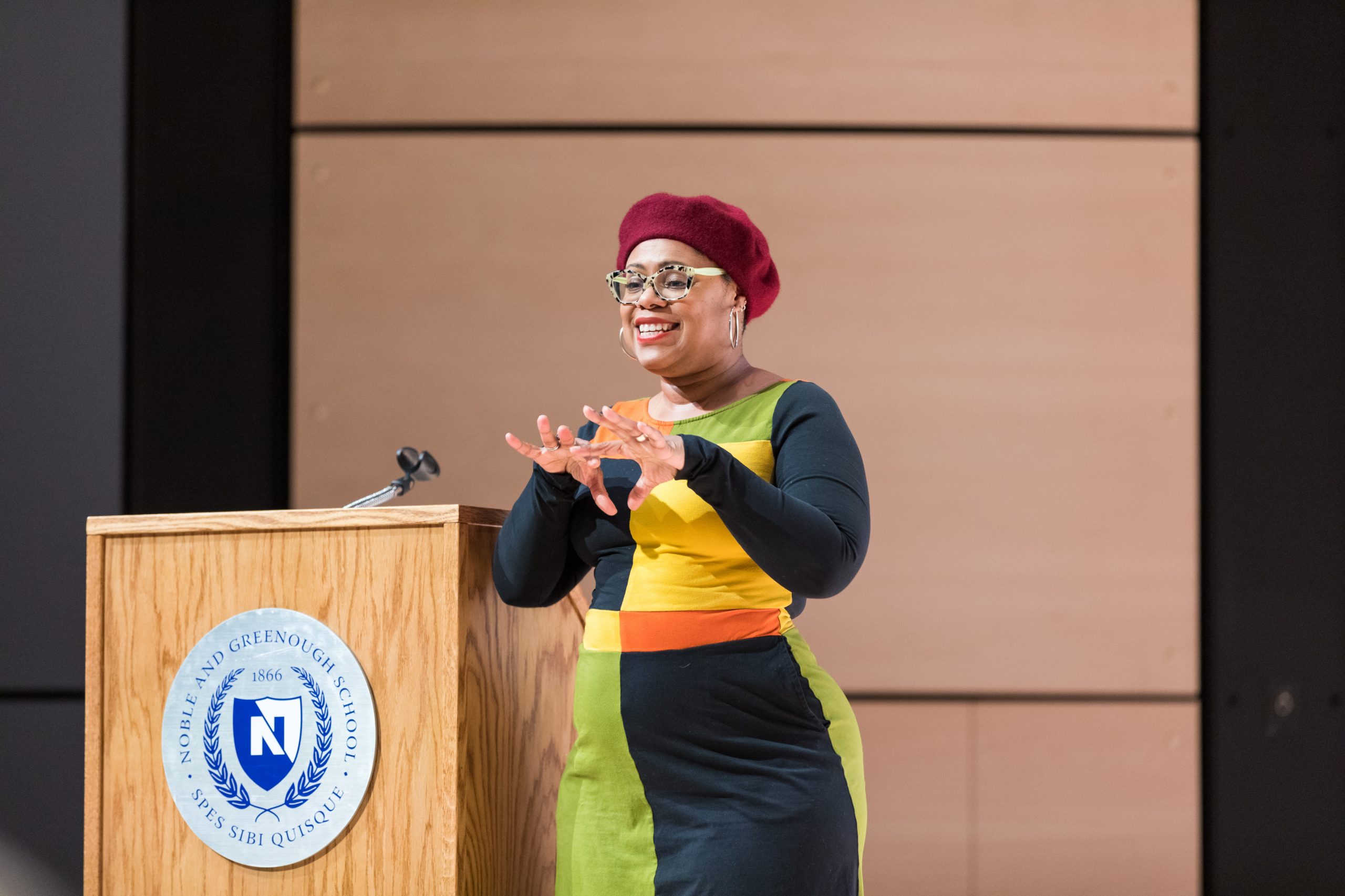 On Wednesday, February 12, author Ibi Zoboi received a warm introduction by Saffiyah Coker ’20 in assembly. Zoboi spoke about immigrating at age four from Haiti, a country most often characterized by the media as the poorest in the Western Hemisphere. Zoboi, who now lives in New York, has published a string of critically-acclaimed novels for young people, among them, American Street, My Life As An Ice Cream Sandwich, and Pride. Most recently, she edited a collection about being young and black in America, called Black Enough, Stories of Being Young and Black in America, which features pieces by other celebrated black American authors for young people. This September, she will release a new book she co-authored, composed in verse about an African-American teen boy and artist who is incarcerated.

Currently working on a novel about an African-American girl going to school in an elite, predominantly-white institution (PWI), Zoboi draws inspiration from her own daughter’s experience in such a school, and from speaking to students at schools like Nobles. To highlight how much people have in common and the importance of the immigrant experience, she led assembly-goers in an exercise where they raised their hand if they were born in another country—then if their parents were—or grandparents, and so on. Questioning continued to those whose ancestors came on the Mayflower, and those who didn’t come of their own free accord. Zoboi asked people to notice who was answering questions and how. “I used to try to prove that we were a country of immigrants,” said Zoboi, “Until I went to Nevada and I had four Native American students who lived on a reservation call me out. I do this for everyone to look around the room. For each of us, there is a story of an ancestor who came here with different dreams and had to assimilate. I became a writer to share the story of young people. You’re not alone. Your experiences are unique to you.”

Addressing the middle schoolers in the audience, Zoboi admitted she wasn’t a big reader at their age, but then said, “I didn’t love reading until I discovered books and who I was through them. Readers have a stronger sense of themselves.” A nervous ninth-grade Zoboi gave way to an 11th grader determined to become a writer. Now, as the mother of three teens, Zoboi says, “The strongest thing I pass on to them is a sense of cultural identity through lots of reading for fun.” Zoboi described how reading provides outlets to other worlds, windows into new perspectives, and mirrors of one’s own experiences.

To all, she urged, “You all have a story to tell. Dig into your past. Ask stories of the people who came before you.”

Class visits included the creative writing club and several upper school English classes. The day culminated in a lunch with various affinity groups for students of color in the Castle, who shared with her their experiences in a PWI. In turn, they asked her about representation of immigrants and people of color in her novels, and her own experience as a first-generation Haitian—since many of the students are themselves immigrants or children of immigrants.

Zoboi has been a journalist, a poet, and has written in a variety of forms, from short stories to science fiction and contemporary literature. Part of the reason she loves writing for young people is that it allows her to “be more creative and take more risks.” An educator herself, she expresses disappointment with adults who discourage youth from daydreaming. Instead, she sees it as a valuable way of observing the world, and an essential part of the learning process.

During a conversation with Class I students in Julia Russell’s short story elective, she asked how they see the world. “It’s about being empathetic so you can write a more human story. Whether or not you’re a writer, it’s important to have an opinion and a perspective. You cannot be a writer without a point of view.” In looking inward for story ideas, they discussed privilege, not only financial, but educational and generational—how much life’s opportunities are predetermined by the success of one’s family. Some students talked about relative wealth, and the self-consciousness that comes with unearned privilege. “It’s important to evaluate where the shame comes from,” said Zoboi. “How will someone use or misuse the privileges they’ve been given?”

On Twitter, Zoboi (@ibizoboi) posted after her Nobles visit, “Favorite question today from an inquisitive, wide-eyed, Haitian teen girl: ‘How did you, like, find yourself?’ My heart sank. I know exactly what she meant. Maybe that’s the question all teens want to ask when they meet an author or open a book to meet a character.” With Nobles students, she shared the rewards of her writing process, along with an honest admission of its challenges. Ultimately, Zoboi said, through her writing she hopes to capture and reflect universal human experiences … while she explores different genres and keeps readers guessing.