A Space for Debate 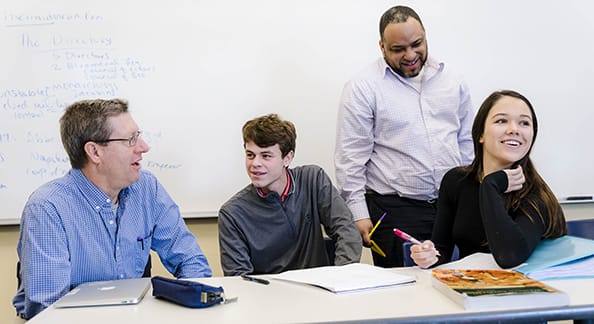 Last week, Nobles history students debated the positions of people from long ago, from women and serfs of Napoleonic times to cell biologists and cancer sufferers of the 1950s.

In AP Euro, Lee divided students into two groups, with group one arguing that Napoleon was a son of the Revolution, and group two arguing that he betrayed it. Priscilla Singleton-Eriyo ’19, representing group one, argued that Napoleon “granted more freedoms than any other leader of his time, so he is truly a son of the revolution.” Sibley Dickinson ’18, speaking as witness “Jacques the serf,” agreed and described how the Napoleonic code increased France’s social mobility through a greater emphasis on merit over the familial system.

Representing group two, Caroline Kinghorn and Max von Schroeter, both ’19, gave emotional counter arguments supporting their belief that Napoleon betrayed the revolution. Von Schroeter asked Kinghorn if she had suffered any consequences under Napoleon’s rule. “Don’t get me started,” Kinghorn said. “Fear of the secret police strikes our hearts.” Von Schroeter added, “I’d like to note that Napoleon took away 70 of the 73 national newspapers. Does that sound like liberty?” When he asked Kinghorn to comment on Napoleon’s censorship, she responded with an compelling account of her “dear friend” who complained of the regime, was wrongfully accused of infidelity, and then executed. “Then,” yelled von Schroeter, “he is an enemy of the revolution!”

Bryant’s class spent a week reading and discussing multiple perspectives surrounding the case. Some students believed that the economic perspective was the most important, and wanted to discuss the financial gain of the researchers and pharmaceutical companies, and the Lacks family’s missing participation in that. Other students emphasized the contributions to science and the benefit to current patients of relevant illnesses. Still others thought the medical community exploited Lacks’ race and class for their own gain.

Differing opinions among students in the course demonstrated exactly what Bryant hoped it would. “When we try to solve problems,” he explained, “we may not be starting in the same place, which causes tension.” Bryant’s students will apply skills gained through these debates to a final project that analyzes public policy issues currently affecting the city of Chicago.

Note: Slideshow may take a moment—please refresh page if it doesn’t load.