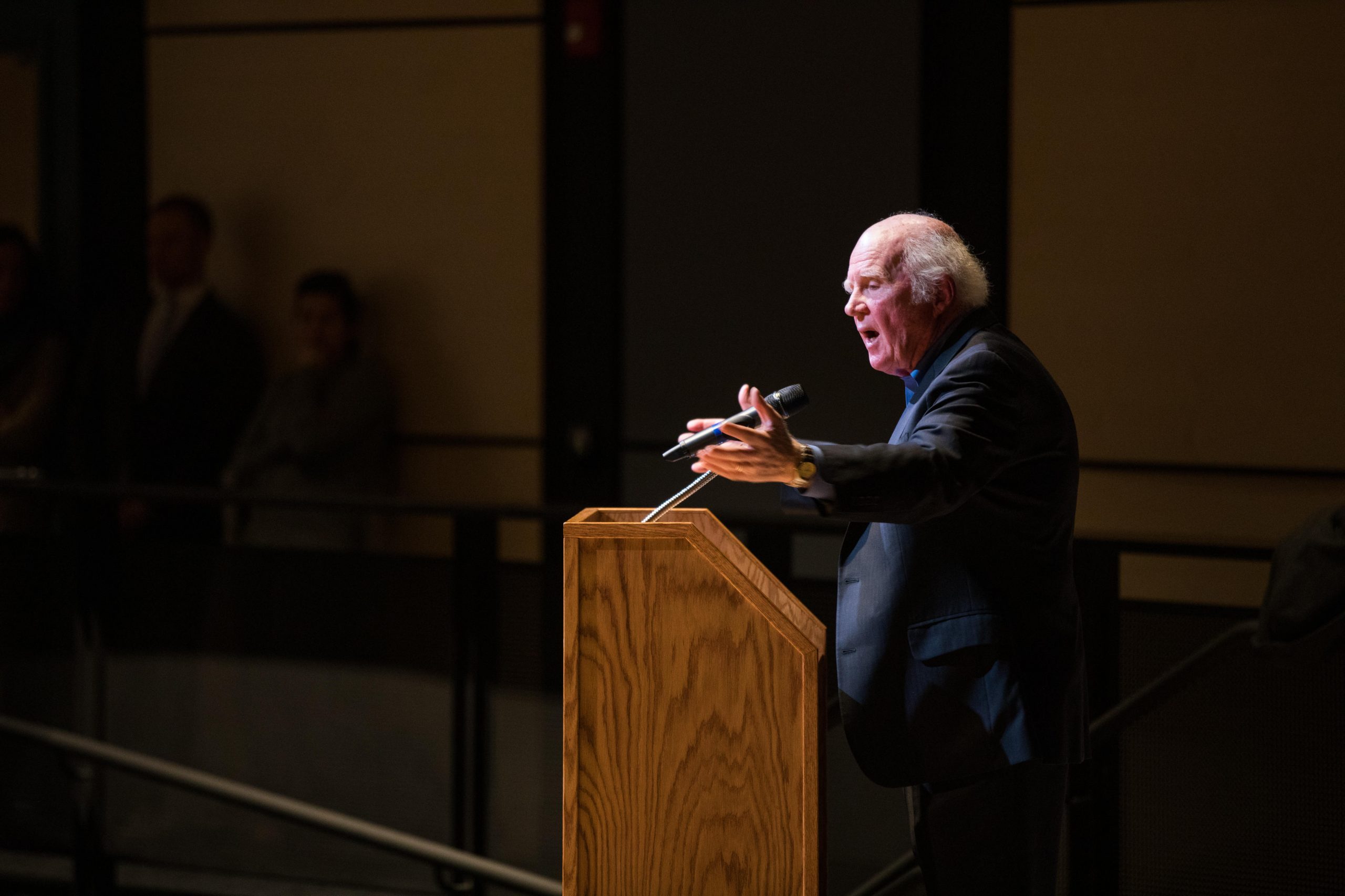 What’s in a city’s motto? In the 1960s, Atlanta—in response to contemporary pressures and its history of and reputation for racism—adopted the slogan “Atlanta, The City Too Busy to Hate.” Even as a high school student at the time, Taylor Branch, now 73, poked at the ridiculousness of such a peculiar public relations assertion.

At assembly on February 5, Taylor Branch—who grew up in Atlanta during the civil rights movement—gripped the community with his wisdom, wit and perspective on civil rights, race relations and the dangers of cynicism for our nation. History faculty member Oris Bryant introduced Branch, noting Branch’s national accolades—a MacArthur Fellowship among them—and acclaimed books on Dr. Martin Luther King, Jr., including Parting the Waters: America in the King Years, 1954-63, which won a Pulitzer Prize in 1989. Branch began his 50-year career as a reporter; he has written four books on King; an influential Atlantic article, “The Shame of College Sports”; and a book on former President Bill Clinton, based on one-on-one interviews.

Branch told students, faculty and staff that race underlies many complicated issues—in ways positive and negative—in society still. He asserted that the civil rights movement should be credited with much more than the gains toward equity for black Americans: He connected the boldness of the insistence on desegregation to gains for feminists, the LBTQ community, and even white Southern society, which was also psychologically and economically liberated when legalized segregation ended. Branch noted that the first Southern sports team, the Atlanta Braves, came only after all races could sit together in a stadium.

Branch acknowledged the importance of the March on Washington but stressed that events in Birmingham, Alabama, which culminated with young children joining the protests, were a palpable, clear turning point in American history. “I call it the Children’s Miracle,” he said. When the world witnessed images of black girls as young as six making themselves vulnerable and exhibiting what Branch calls “self-discipline,” it “melted the resistance.” Demonstrations spread all over the country. He noted that this turning pointing is largely disregarded in history books.

Branch described how, today, race relations are often below the surface—like blood vessels—and considered either solved or unsolvable. Both of those determinations allow people to take no action, he said. “We need to deal with it, and good things will happen if we do,” he said.

Branch spoke about the difference between violence and non-violence and MLK’s adherence to nonviolence. “Most people who draw breath think the idea that you can solve things by votes is preposterous … nonviolence is the key to that. The lesson of history is that, since Napoleon industrialized warfare in the 19th century, you don’t really have power if everybody is fighting. In the United States, we take nonviolence for granted.

“America is a great cathedral of votes—not just when we vote for president or Congress—but on the board of this school and on the boards of all of your churches,” Branch said. “The most salient thing in our culture is the divide between our belief in nonviolence and our commitment to voting and our culture.

“We need to remind ourselves of our freedoms,” he said. “We need to understand what violence and nonviolence can accomplish,” he said, noting that media and popular culture often glamorize violence as a way to resolve conflict. Branch also answered students’ questions in Towles Auditorium and visited classes during his visit.