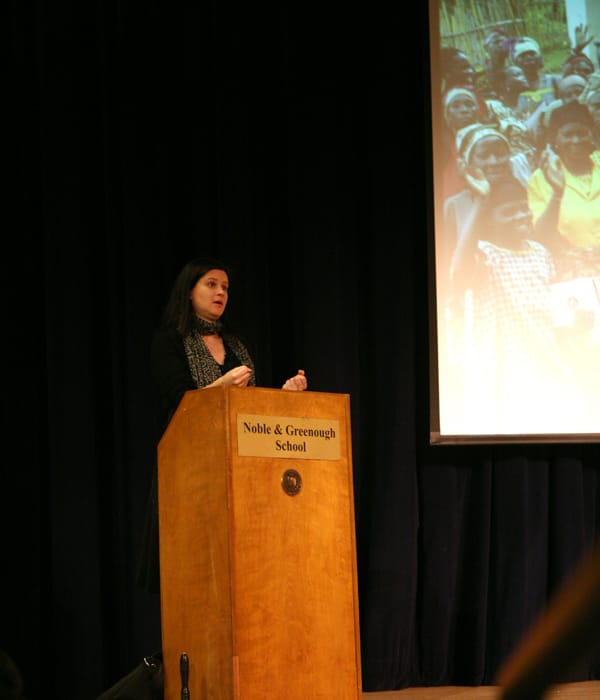 Activist Lisa Shannon visited Lawrence Auditorium on April 4 to share her story with the Nobles community.

Inspired by a 2005 report on Oprah about the atrocities of war in the Congo—particularly violence against women—Shannon decided to make a difference.

“I could not pick Congo out on a map [then],” she said. The reports of rape and disempowerment, however, had captured her attention and she wanted to understand more.

“I learned that the war was the deadliest since WWII and there was no movement and that the worst sexual violence on the planet [was being perpetrated every day].”

She ran a solo 30-mile run to sponsor Congolese women through Women for Women International. She decided that once she had raised $1 million, she would have started a real movement. At last count, her efforts had resulted in $11 million to sponsor Congolese women who are using the funds to buy land, pay for children’s education, start micro-businesses and care for their war-ravaged families.

Shannon encouraged Nobles students and faculty to “not flip off the empathy switch.” She believes, she said, that relating to people as though they are members of your own family allows for compassion and humanity.

Prior to her activism, Shannon had run a stock photography business. The agency, she said, aimed “to capture the perfect image of happiness.” She says that despite being labeled a hero, her journey has not been glamorous or easy. The most important thing, she said, is to just show up.

“All you can do in those moments [when you are not feeling powerful or effective] is show up and hope that the reverberations will be bigger than that moment.”

Shannon has visited Congo three times, talking to the women she helps as well as to child soldiers, members of the militia, environmentalists and others. She also tackled an economic driver to the conflict when she brought media attention to the use of conflict minerals from the Congo in everyday electronics. Shannon chronicled her experience in A Thousand Sisters.

She is founder of Run for Congo Women and the first national grassroots activist in the United States working to raise awareness of the forgotten humanitarian crisis in Democratic Republic of the Congo. Since Lisa’s lone 30 mile trail run in 2005, thousands have joined Run for Congo Women, now an international movement which has sponsored more than 1400 war-affected Congolese women through Women for Women International. Shannon’s first book, A Thousand Sisters, targets mainstream audiences, detailing her journeys into war affected eastern Congo in January through February 2007 and May 2008. Pulitzer Prize winning author Alice Walker wrote about A Thousand Sisters, “I can’t imagine a more perfect book for arousing the power of American women (or women and men everywhere) to rush to the defense of our Congolese sisters.”

Shannon went on her third trip to Congo January through March 2010, where she visited the remote northeast, which will be covered in her work-in-progress sequel to A Thousand Sisters, Mama Koko and the Hundred Gunmen. In May through June 2010 she successfully spearheaded the grassroots outcry in support of conflict minerals legislation. Shannon firmly believes the thousands of “average” women she’s met on this journey have the passion and potential to emerge as international leaders for Congo. This is the foundation of the A Thousand Sisters campaign.

Shannon also spent the day at Nobles, hosting an extended Q&A session after Assembly in Towles Auditorium and visited classes. In Ben Snyder’s America and Genocide in the 20th Century class, she discussed the term genocide in relation to Congo. “The word genocide has been incredibly loaded around when it has been used and when it has not been used in relationship to Congo,” she says. “It’s a point of tremendous debate.” But she says that technically the conflict in Congo is not genocide.

Students were also curious to know Shannon’s feelings towards the Kony 2012 video that went viral. “There’s the question, ‘does awareness turn into action?’ ” she asks. “Most people who saw that video aren’t going to do anything but a lot of people will. And maybe it only takes 10 or 100 people who saw that video who decide they want to read a little bit more about it and do something more about it…Certainly everyone knows who Joseph Kony is now. It’s positive it that way.”

But when a student expressed concern about contributing to Invisible Children, Shannon says, “It’s very important to question whenever you give money, ‘where exactly is the money going and how much money goes to overhead.’ ”