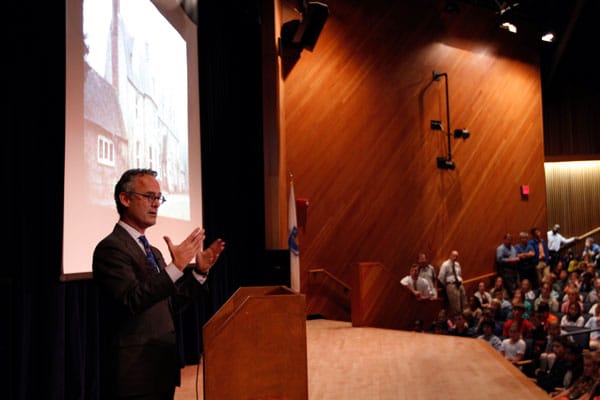 English teacher and former Headmaster Dick Baker took to the stage on Wed., Oct. 3, to introduce best-selling author Amor Towles, Class of ’83. He briefly described Towles’ time at Nobles, his successful career in finance, and the road to his highly-acclaimed, first published novel, Rules of Civility. Although it’s been more than 30 years since Towles attended Nobles, Baker said it “felt like yesterday,” and vividly described his former student as a consummate actor, outstanding public speaker and determined scholar. “Amor wasn’t a rebel, but he wasn’t conventional…it’s one of the lessons I think he lives by. You don’t have to commit yourself to convention.”

As soon as Towles took the stage, it was clear Baker’s words would ring true. The Assembly audience would have been easily captivated with stories from his world book tour, life as a published writer, or details about the probable movie adaptation. It’s what one might expect from a best-selling author. But, Towles set the topic of his book aside and spoke to students about a valued life lesson, as illustrated by ’60s rock group Led Zeppelin. Unconventional? Yes. And everyone gathered in Lawrence Auditorium was hooked.

Towles detailed the English rock band’s creative process while recording the 1971 album, Led Zeppelin IV, and the history behind their remake of Kansas Joe McCoy’s “When the Levee Breaks.” Towles shared that years later, when lead guitarist Jimmy Page was asked about the album’s success and components of the recording process, he responded simply, “Passion, honesty and competence.” Towles has adapted those three words as a personal motto, and he urged Nobles students to take a closer look into their meaning. He talked about their impact and said, “If you develop competence, have passion for what you do and approach everything with honesty, the outcome will always be fine.”

Long Assembly ended with a Q&A session, Towles took the opportunity to explain how life’s unexpected curve balls often lead to bigger and better things, advising students to take things as they come. Prodded by audience questions, he also used the time to circle back to Rules of Civility. Conventional? Maybe. But with a best-selling author of such talent among them, Nobles students, faculty and staff couldn’t help themselves.