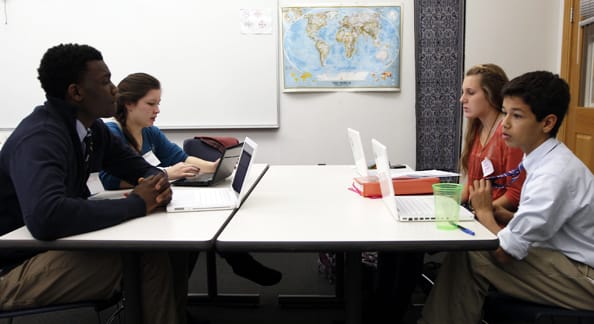 As they engaged in debate during a mock Israeli-Palestinian peace conference, Class IV (9th grade) students in the History of the Human Community (HHC) course grappled with the roles of presidents, prime ministers and other representatives who have a stake in the Middle East.

The recent two-week simulation project required students to research an assigned position extensively, focusing on the issues of territory, status of Jerusalem, security and refugees. They investigated details and strategies related to their roles, searching to define identity and perspectives about the conflict.

The course’s main objective is to gain knowledge and understanding of the competing interests vying for peace, security and self-determination in the lands of Israel and Palestine. Taking what they have learned in class about the Middle East along with their extensive research, students test their comfort zone and advocate a position, which might include representing Jewish Settlers, Israeli Peace Groups, Palestinian Liberation Organization or Hamas, among others. In teams, students work toward points of agreement by negotiating about Israeli and Palestinian land division, security checkpoints, citizenship, rights and violence level.

“Before researching, I was positive about my views on the issue, but the conference really helped me to consider different view points,” said Liz Furlong ’15. “The project was emotionally hard for me as I was assigned to represent a negotiator with extremely different view points from me. The assignment forced me to stand in someone else's shoes—shoes I wasn't sure I wanted to wear.”

In the second semester HHC will cover topics including the Indus River Valley Civilization, Hinduism, 19th and 20th century history of India and the creation of Pakistan.