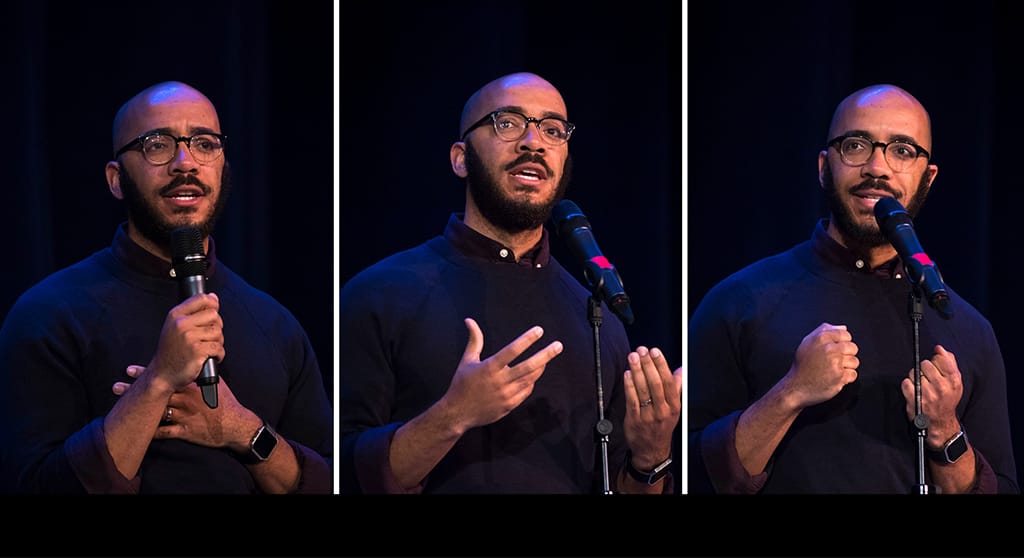 Poet, teacher and scholar Clint Smith addressed the Nobles community in Lawrence Auditorium on February 7. Director of Diversity Initiatives Erica Pernell introduced Smith, who is a doctoral candidate at Harvard University, a 2014 National Poetry Slam champion and 2017 recipient of the Jerome J. Shestack Prize from the American Poetry Review. He has also received fellowships from the National Science Foundation, written for national magazines and delivered two TED Talks. Smith’s debut collection of poems, Counting Descent, was published in 2016 by Write Bloody Publishing.

Smith, who is a former high school English teacher, says that his dad was his first teacher. When Smith was young, his father underwent two kidney transplants, confronting Smith with mortality in a way he’d not yet contemplated. In one of the poems he read at Nobles, he speaks in his father’s voice: “Clint, love your mother like a stained-glass window in a war zone.”

Smith told the audience that poems have always been the way he makes sense of and processes the world. He described his often idyllic youth in New Orleans as Disney Channel-like in its positive, mixed-race neighborhood. He explained the tension between his happy family and immediate community life with his father’s assertions that as a young black man his safety depended on following different rules than many of his friends. He described it as “a marathon of cognitive dissonance.” Smith became part of an intergenerational conversation: his grandfather talked to his father who in turn talked to him; and he anticipates similar conversations with his son, now just 8 months old.

Smith talked about the need for grounding conversations and race and equality in a fuller historical context, recognizing for instance the brilliance of founding father Thomas Jefferson while also considering that he was a deeply racist man who believed blacks to be incapable of love or of making art. “That’s a version of history I never learned,” he said.

The opening of Smith’s debut book of poems features a Ralph Ellison quote: “I recognize no dichotomy between art and protest.” Like Ellison, Smith confronts cultural challenge through art. A poem that he read in assembly, “what the fire hydrant said to the black boy,” begins:

Smith encouraged the Nobles community to consider the holistic versions of the truth—to avoid reducing Martin Luther King, Jr. to a famous excerpt from one speech or to ignore the contributions of civil rights activist Rosa Parks, naming only  a single act of protest on a bus. Such figures should not be reduced to caricatures, he said, noting the complexity of the 400-year history since slaves arrived on American soil, and that 12 of our first 18 presidents owned slaves. He reminded listeners that while Americans have made progress in race relations since the 1960s, racism and the effects of its institutions and policies continue to have profound effects. “The woman who opened the Museum of African American History in Washington, D.C. was the granddaughter of someone enslaved. Those people are still alive; they’re still here.”

“Oppression doesn’t disappear just because you decided not to teach that chapter,” he said. “[We can be] so good at covering our ears while someone else is screaming.”

Following his assembly talk, Smith spent a period with Poetry and Race and Identity in America classes in which students wrote poems addressed to themselves during a meaningful moment in time, sharing advice and perspective. They discussed how the vulnerability of sharing personal writing helped them to better understand one another. Smith said he views  poetry as “an endeavor in time travel” that helps him get why he is who he is and how he is connected to society.

Smith is writing his doctoral dissertation on race and inequality, focusing on how people incarcerated for life experience education. He lives in Washington, D.C. with his wife and young son.