Beauty Inside the Shadows 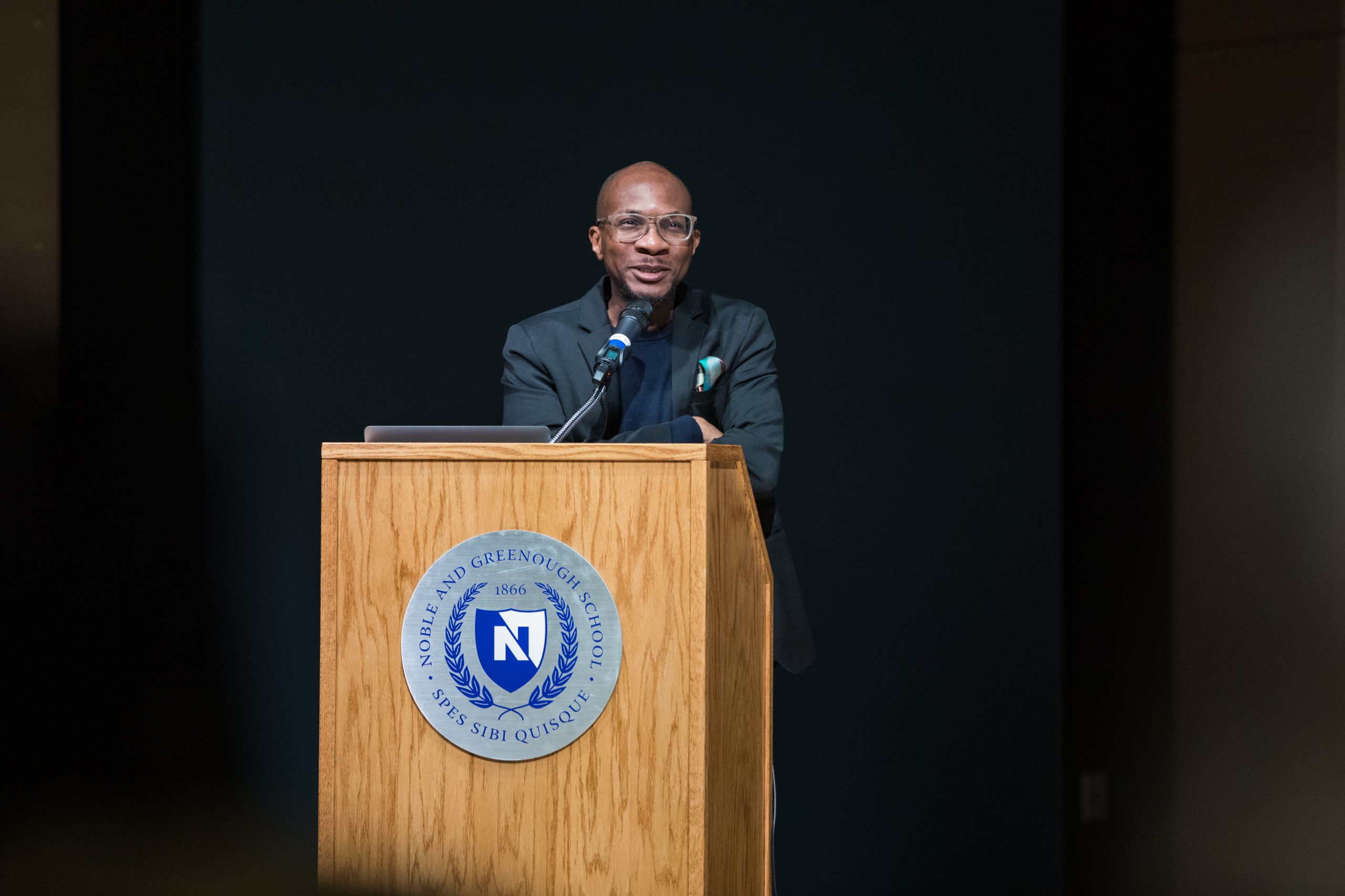 “Darkness is not empty. It is full of information at rest … challenging us to look more closely and to bring out what is in the shadows and bring it out into the light, just so that we can do better by each other”

On Wednesday, February 19, Teju Cole walked unassumingly onto the stage in Lawrence Auditorium, placed a stack of books on the podium, and instead of launching immediately into his presentation, calmly asked the Nobles community, “How are you feeling?” Students and faculty murmured quiet but audible responses, taking a welcome deep breath and connecting immediately with Cole. The title of his talk, “Exploring the Mysteries of the Ordinary,” is a concept that is woven throughout all of his work—as he explained it, “the idea that the everyday world is something that is interesting artistically, that we can make work out of that.” Cole has used his many artistic interests and talents, from writing to photography and the visual arts, to observe everyday things and think very hard about them, making thoughtful, poignant and mysterious connections between these seemingly small things and the world around them.

In his introduction of Cole, Visual Arts Department Chair John Hirsch listed the many accomplishments of the acclaimed author and photographer, who also happens to be the Gore Vidal Professor of the Practice of Creative Writing at Harvard and the former photography critic for the New York Times Magazine. Cole’s first novel, “Open City,” won the PEN/Hemingway Award, the New York City Book Award for Fiction, the international literature award and the Windham Campbell Prize for Fiction, and his subsequent publications have earned him similar praise and distinction.

A true teacher, Cole was clear and straightforward with regard to the structure of his talk, explaining his plan to show his approach to writing and photography by exploring the books that he has published. Cole introduced his work chronologically and stuck to the linear structure of his talk, but throughout he wove in many intricate musings about the intersection of art and real life, doing so with such subtlety that the lessons he was sharing felt like a conversation—one where the words sit and marinate, and nothing at all like a lecture where the audience feels more compelled to take notes than to listen and to feel.

Cole opened by talking about his first book, “Every Day is for the Thief,” a fictional account of some of his personal frustrations with his home country, Nigeria. What is unique about this work—and the majority of the work that Cole does—is that he weaves photography throughout the text of the story. In order to integrate the imagery in an authentic way, he takes this approach: “If I was writing this book in the style of this fictional character, I should also take pictures in the style of this fictional character. I wanted to find a photographic style that connected to this man I had invented … I wanted photos that were black and white, that had a strange intensity and charge to them.”

As Cole discussed each of the five books on the podium in front of him, the stories that he told revealed the many layers of the work that had gone into the creation of each one. “Over the course of a book,” said Cole, “You are connecting many different kinds of things together. When you’re making a book you’re not making a page … and so the connections among different parts of the book are very important.” Cole is always observing the ordinary things around him, critiquing these objects, places, images and words, the things of our days, to investigate their role within the broader scope of his work, never looking at a thing in front of him, or at a page in one of his books, in isolation.

Based in New York City, Cole’s next book, “Open City,” was written a few years after the 9/11 attacks. One of his few books that does not contain images, “Open City” is an investigation of how many different kinds of thinking and memory connect to each other—“The point of ‘Open City,’ said Cole, “is just that history is so interconnected in so many strange ways … everything is always connected in a mysterious kind of way.” In keeping with the theme and bringing the topic closer to home, Cole made the interesting observation, explaining to the students they were probably the first group he had discussed the book with for whom 9/11 was actually a historical event, and not a personal memory.

Cole went on to discuss his collection of essays and his biggest work to date, “Known and Strange Things,” which he explained is about exploring both the known and the unfamiliar. “My central idea as an artist and as a creative person,” said Cole, “is that everything is interesting. If you are alive and in the world, everything is interesting. And if something interests you to pursue it,” encouraging us all to investigate, to travel and to ask the questions about what came before us. It is in this collection that Cole begins to explore, through Ray Decarava’s 1963 black and white image of a Mississippi freedom marcher, a concept that permeates much of his work: “inside the shadows, there is a lot that you can pay attention to that is beautiful.”

Before reading an excerpt entitled “New York City” from his book “Blind Spot,” Cole prefaced it by explaining that it was “an example of the way I bring in extraneous material and I combine everyday observation with history and with texts and so on.” In the essay, Cole juxtaposes a modern image of a blonde woman in New York City that begs interpretation, with text that, amidst references to Greek Mythology, presents similar veiled imagery: “But the father Agamemnon’s grief was greatest of all, a shattering extreme of grief, and Timanthes could not, or would not, go beyond the limit of what he had already shown. And so he depicted Agamemnon without depicting him: turned away, with a veil over his head.” The intertextuality of art and literature in Cole’s work constantly pushes the reader and viewer to think in new and challenging ways.

The final book that Cole discussed, “Human Archipelago,” was a one that included writing and imagery and was done in collaboration. Among the images in the book were those of people who have been displaced from their homes over the past 20 years. “The reason we felt it was urgent,” he said, “ was because displacement has become a very important part of our contemporary story. So this is an act of acknowledging that and trying to focus on thinking into that space.”

Throughout the talk, Cole consistently made the effort to speak to the students, to get on their level, and to encourage them to see that it is possible, with talent and hard work, to live a creative life. At one point, Cole emphasized, “the entire body of history and knowledge, the whole library, belongs to you, and you just go in there and grab what you need.” He spoke passionately to the students about the importance of following their interests and opening their eyes to the possibilities and options in front of them. “You can go to college and do sciences,” he said. “You can go to college and do accounting. But if you also know that you want to be a poet, or you want to be a composer, you also have to make time for that.”

Nobles students, along with teachers and staff, were able to visit with Cole in Towles during the period following assembly, during which he answered thoughtful questions and continued the conversation about his work and life. From there, Cole spent the morning visiting classes. The community was able learn how aesthetics, activism and the things of the everyday run through Cole’s work, but never in isolation. Like a conductor of an orchestra, he brings all of the elements together into one final performance, each one working in its own mysterious way to create harmony within the piece.