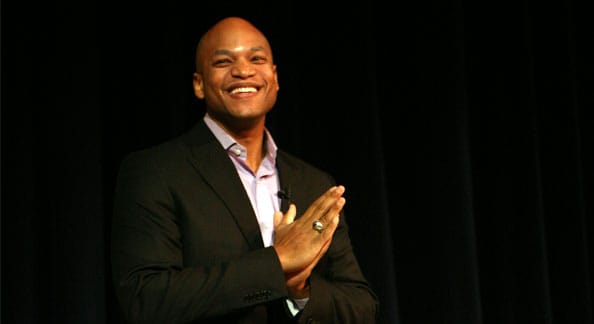 Wes Moore, author of New York Times bestseller The Other Wes Moore and host of “Beyond Belief” on the Oprah Winfrey Network, spoke at Long Assembly in Lawrence Auditorium on Feb. 6.

The Other Wes Moore was required reading for the Nobles community. It centers on the fates of two young men raised in Baltimore—Moore’s own story and that of another man, also named Wes Moore. The other Wes Moore was convicted of murdering an off-duty police officer just before the author was traveling to Oxford University as a Rhodes Scholar.

Like the incarcerated Moore, the author was once on a dangerous path. “I found myself hurting people who loved me to impress people who couldn’t care less about me,” he said. Moore also said that he first felt handcuffs on his wrists at age 11.

Moore told the Nobles community that each of their stories could have been the other’s story. “It’s about the decisions we make,” he said.

Moore recounted the challenges of his time at a private school and the tenets of leadership that he learned at military school. “Expectations matter…Potential is universal. Opportunity is not,” he said.

Moore followed his talk with a Q&A in Towles Auditorium. Watch for fuller coverage of the Wes Moore visit in the spring issue of Nobles magazine.