Beth Chandler on Equity and Empathy 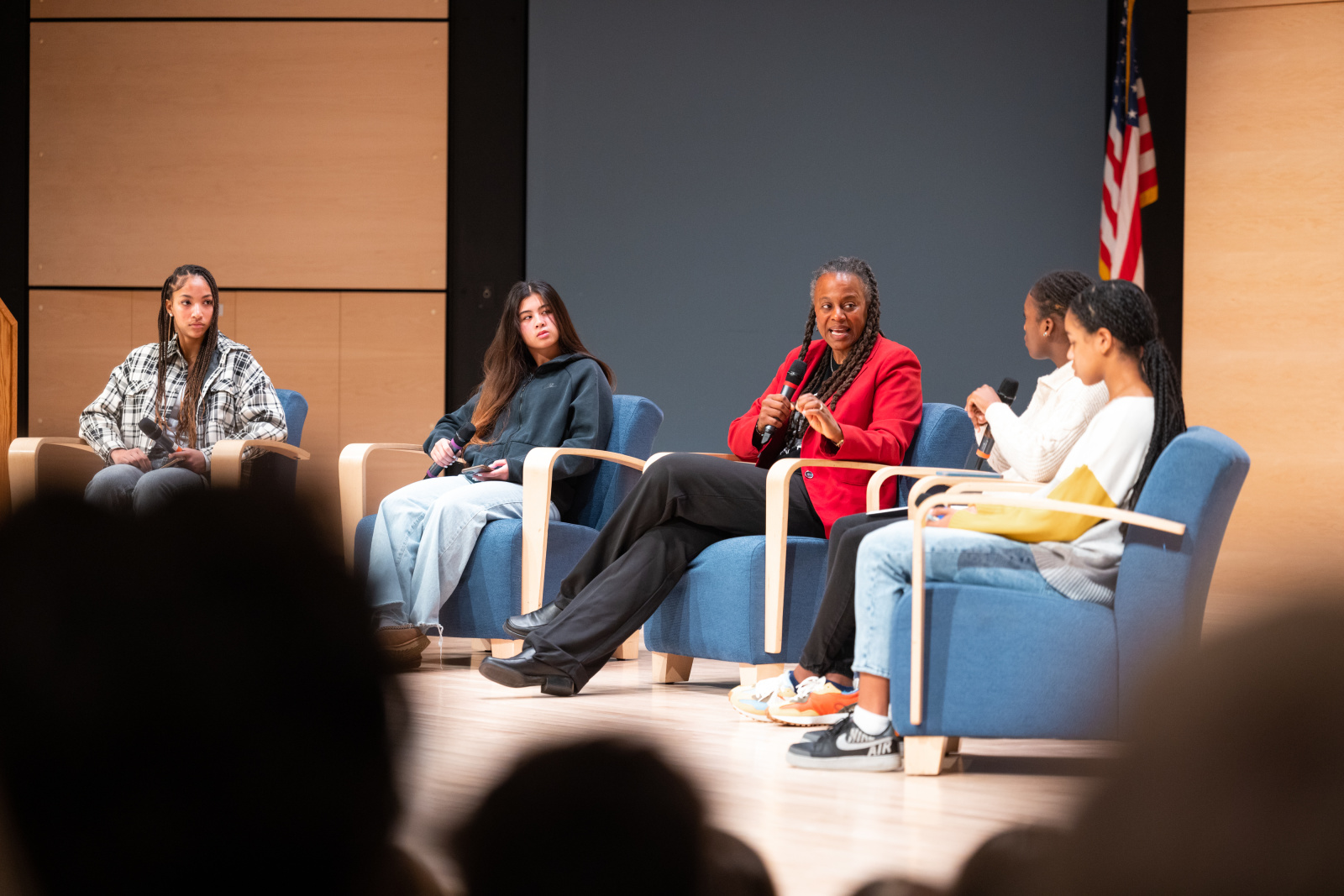 Most people credit their orthodontist with giving them a straighter smile. But community leader and former pro basketball player Beth Chandler says hers made her smile for a different reason: igniting her athletic career. When Chandler was ten, her orthodontist encouraged her to rally a group of girls in town to start a basketball team, and then coached and backed them. “That,” Chandler said in assembly on November 16, “is how I learned the value of allyship.”

As the child of a basketball coach, Chandler has played as long as she can remember. Throughout her youth and then at Harvard, as a scholar playing basketball, she “wrestled with the contradictions” around equity and opportunity that surrounded her. Sidelined by an ACL injury, she was steered away from surgery, while at the same time, a white male hockey player at Harvard went under the knife and was back on the ice that season. Chandler was dismissively told that “as a girl,” given her limited professional opportunities, surgery would be pointless. It struck her…”Because while it was true, there weren’t a lot of opportunities for women at that time to play, there were still some, and I was entitled to know what all my options were.” She underwent surgery and returned to Harvard a year later, where she wrote a thesis with her economics professor and others at the National Bureau of Economic Research (NBER) which explored what young black men in Boston faced in the local job market.

Chandler’s data showed her that career opportunities were “based on who people knew, not what people knew. People with rich social networks were much more likely to land a job than people without. And maybe I shouldn’t have been surprised by that. But I was, because I had always heard you worked hard; you picked yourself up by your bootstraps, and things worked out. But that’s not necessarily what my data was showing. And that experience also was helpful for me as a student, because it led me to start challenging the things around me and to challenge myself academically instead of playing it safe.”

Chandler also challenged herself by playing professional basketball in Austria for two years, living with local families and culturally immersing herself as the Berlin Wall came down and she witnessed people sacrificing all they had, fleeing for freedoms she had previously taken for granted. She came back to the U.S. and worked for 15 years for various organizations, mainly nonprofits, that addressed the structural inequities that troubled her. During that time, she learned a great deal about the frustrating systemic issues for people struggling with government assistance programs, or trying to start a new life after a period of incarceration, and cycles of oppression. She introduced the “four i’s” of oppression, which range from the ideological and institutional, to the internalized and interpersonal.

Since 2018, Chandler has been president and CEO of YW Boston, which “helps individuals and organizations change policies, practices, attitudes, and behaviors with the goal of creating more inclusive environments where women, people of color, and especially women of color, can succeed.” Chandler hopes that through the work at YW, she can increase understanding and productive disruption to promote a more just world. She told students, “I hope whether you have an interest in equity or not, that my story is an opportunity for you to think about, what are the things that excite you? What are the contradictions that you might be seeing?… and to explore those and see where it leads you.”

After Chandler shared her own journey, four Nobles varsity girls basketball players joined her onstage for a Q&A about her trajectory and insights. The students, Chayil Mauristhene ’23, Tahira Muhammad ’24, Nasi Simmons ’24 and Christina Pham ’25, all belong to Sister 2 Sister, Nobles’ affinity group for female students of color. They asked about her experiences playing basketball in college and professionally in Austria, her community work, and advice for them as young women of color—as well as for all students who want to challenge structural injustice.

Opening the Q&A up to the audience, students across grades, as well as faculty, asked Chandler about her experience, advice, and mainly, the value of diversity in any community—whether a classroom or corporate environment. Chandler emphasized that diversity is about much more than race, sexuality or other identities—it includes each person’s lived experience. Listening to and believing those experiences, and empathizing with those we encounter, befriend and work with is crucial to building understanding, but also to creating community and meaningful change.

On the importance of diversity, Chandler said, “Research shows that organizations who have diversity, particularly in leadership positions, outperform their peers. So from a business case, it makes sense. It is important, in order to be successful, and to get the best answers, to have people with different lived experiences contributing their ideas. Diverse groups are more creative.”

Chandler affirmed the importance of affinity spaces, and advised young women of color, “Find people who support you, and who you feel that you can trust, because there are so many things in the world that tell us that we’re not worthy. Don’t believe the messages that the world gives you; believe in yourself and know that you have value, that you are important, and you do matter.”