Between Unlikely and Impossible 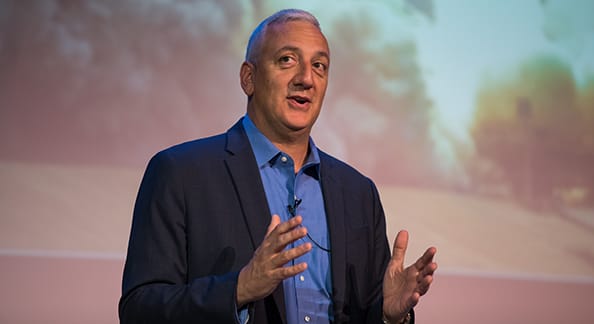 As a 6-year-old in Long Island in 1969, Mike Massimino was spellbound when he saw space pioneers Buzz Aldrin and Neil Armstrong walking on the moon across his black-and-white TV. It set a lifelong dream in motion. “I thought astronauts were the coolest, and that people leaving the planet was the most important thing to ever happen. I wanted to be one of them, but a little voice in the back of my head told me I’d never get the chance.”

To this day, Massimino, a NASA astronaut, mechanical engineering professor at Columbia and the recipient of numerous honors for flight and technology, confesses to being scared of heights, fast cars and roller coaster rides. What he has learned, though, and wanted to share with Nobles students, is the crucial difference between unlikely and impossible. As a graduate of Columbia with multiple degrees from the Massachusetts Institute of Technology, he says mathematically, “The truth is, it wasn’t impossible. Just unlikely. The probability was something like .0000000000000…00000…but there was a one out there somewhere. The only way that one turns into a zero is if you give up. Even if something you’re trying to accomplish today or in the future might be really hard, it’s only impossible if you don’t try.”

Massimino shared how he grew from being a space-obsessed child to a high school student interested in math and science, with more practical expectations for his future. At Columbia, and then MIT, he realized his desire to be an astronaut only burned stronger. Stories about the space program on newsstands or TV always drew him in. He says, “All of a sudden, it wasn’t just pilots anymore. There were women, people of color, engineers, scientists and other civilians. I realized could watch it and read about it, or I could try to be a part of it. The only way I could be happy in my life was to at least try.” While at MIT, he applied to the NASA program, and twice, his application was rejected. As a mechanical engineer at McDonnell Douglas Aerospace at the Johnson Space Center in Houston, his third application secured him a weeklong interview with NASA. He described the rigorous process in which he good-humoredly relays, “They got to know me really, really well…and then rejected me.”

The fourth time was the charm, and Massimino proudly became part of NASA’s Class of 1996. “Things don’t always work the first time. Rejection can be hard to take, but it’s important sometimes that you get used to it. I’m lucky enough to have met lots of successful people: astronauts, athletes, rock stars, businesspeople, politicians. One thing they have in common is not that they’ve never failed, but that they didn’t let failure stop them. You can’t always control the outcome, but you can control your effort.”

Massimino described the magic of seeing Earth from space, and the majesty of major metropolises glittering like jewels in the night. He shared nerve-wracking missions from his nearly 600 hours in space, showed breathtaking images taken from the Hubble Telescope, talked about how good astronaut food is but how it can be tricky to eat (cookie crumbs can be an eye hazard!) and described the blinding pure whiteness of the sun’s light. Students also asked about the future of space travel, as scientists and engineers, some of them Massimino’s own students, explore the potential not only through government-funded programs like NASA, but private companies like SpaceX and Virgin Galactica. “We may be on the cutting edge of a Golden Age of space travel,” Massimino said, with the same gleam of excitement of that 6-year-old boy with his eyes on the skies.

Massimino’s autobiography, Spaceman: An Astronaut’s Unlikely Journey to Unlock the Secrets of the Universe, will be available October 4, 2017.